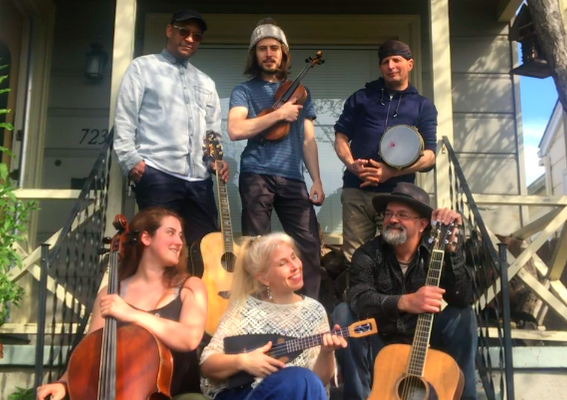 San Francisco indie folk band Brother Spellbinder blends in vintage swing, Americana, hot club, classical and world music to their folk sound to combine an old world ache with a modern twist.  Their sound has been described as Cabaret Folk-Rock, Cowboy Victoriana and Boho Chamber-Folk due to plaintiff vocals, unusual arrangements and various textures.  Started in 2012 by Alzara Getz (uke/vocals/harmonica), the band is rounded out by Jamie Wilson (guitar/vocals), Steve La Porta (drums/percussion), Sean Griffin (electric guitar), Helena Tietze (cello/vocals), Steve Bollhoefer (violin/mandolin/vocals/tap dancing) and Gabriel Beistline (cello).  Brother Spellbinder’s new EP, We Were Children Yesterday, echoes an earlier time of wonder and possibility — and the gradual loss of innocence as we get older. This is an album about metamorphosis and healing. Brother Spellbinder aims to enchant in the age of disenchantment.

The band’s unique sound relies on dulcet cello tones, ethereal violins, lilting ukulele, both acoustic & electric lead guitar, & frenetic rhythms. Lead singer Alzara Getz’s vocals tie the songs together with an emotional fluidity and feminine mystique countered with an occasional dollop of gristle from rhythm guitarist co-founder Jamie Wilson and a sprinkle of silk from cellist Helena Tietze. An eclectic mix, the spellbinders on this project range in age from 22 – 64. As the daughter of rock drummer, Dave Getz, original drummer of Big Brother & The Holding Co., bandleader Alzara developed a passion for music at an early age. Having studied with many renowned masters in their field and working as music teachers themselves, both drummer Steve La Porta and guitarist Sean Griffin love to push new musical boundaries.

The band is premiering their latest single “20 Years Ago” today.  Says Getz, “Twenty Years ago came to me one day when I was out for a walk. I began thinking about the past and what I predicted my life would be like 20 years ago. It also reminded me of my work as a therapist and how so many of my clients seemed to struggle with disappointment and feeling that they hadn’t achieved what they set out to do. I hummed the tune and some of the words into my voice memos and later found the chords at home on my ukulele. I confess it morphed into something a bit darker once all the words sprang to life. Sometimes things don’t turn out well.  My musical partner and rhythm guitarist Jamie Wilson added the chords for the chorus later. They took the melody to a sweeter, more hopeful place. No matter how broken you are, someone, an animal perhaps or a ray of sunlight can offer you comfort and love. Adding sweetness to the bitter leaves you with bittersweet”.

You can follow Brother Spellbinder and stay up-to-date with all band, music and tour news via the following links: