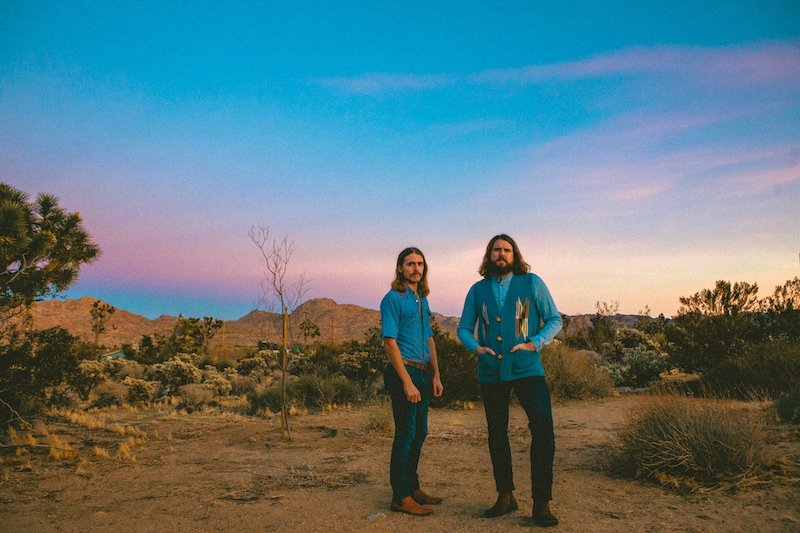 BROS, comprised of Ewan and Shamus Currie (front man and keyboardist, respectively, for platinum-selling Canadian band The Sheepdogs) have released their shape-shifting sophomore album Vol. 2 via Dine Alone Records.  Hellbent on taking the eclectic flavors of their 2016 debut album Vol. 1 to new heights, Ewan and Shamus gathered anyone who might be able to contribute something that they couldn’t do themselves – some horn players, a tabla player, etc. – and approached Vol. 2 with the intention of giving each of the 13 distinct tracks a unique quality of its own. Sheepdogs guitarist Jimmy Bowskill was asked to play instruments he wouldn’t normally pick up, like fiddle and sitar. Even their own father, Neil Currie, an accomplished musician in his own right, was brought in to play some piano on the Henry Mancini-esque instrumental “Clams Casino,” marking the first time they’d ever recorded together.  As a result, the Thomas D’Arcy produced Vol. 2 is complex, symphonic, and epic album with a big-stage and seasoned sound. In addition to the first three focus tracks from the record – “Never Gonna Stop,” “Theme From BROS,” and “Garbanzo Man,” a song that Classic Rock Magazine called “the greatest song ever written about a superhero whose special power is chickpeas” – the 13-track album features sugary anthem “Crazy Schemes,” gospel-like fervor “It Won’t Be Long,” and the over-the-top and catchy “You Love This Song” which was loosely inspired by an episode of The Simpsons focusing on the effects of subliminal messaging. Exhilarating and imaginative, Vol. 2 combines the improbable fusion of pub-rock, honky-tonks after hours vaudeville with the atmosphere of a vintage record collection, a cop-drama theme song, a dive bar jukebox, or an AM radio, creating a musical conglomeration that Houston Press describes as “quirky, charming, fun, and smile-inducing.”

“The musical scope is wider and the worldly sonics more exotic,” explain Ewan. “The power pop refrains sink their hooks deeper. The sly musical jokes sell out harder and the hard charging grooves really pack a wallop.”  The combination of visually evocative instrumentals and finely crafted pop and soul nuggets has undeniably become BROS’ trademark sound. The brothers received glowing feedback from fans and critics alike, including Relix, American Songwriter, Magnet, and others, while gaining further attention through the track “Tell Me,” which peaked at #17 on the Canadian Alternative Rock chart, and to date has racked up a combined 11 million streams. The track has been synced by ESPN, SportsNet, Hockey Night in Canada, Toronto Blue Jays, and enjoyed in-arena syncs with the Denver Broncos, Minnesota Timberwolves, New Orleans Pelicans, Minnesota Wild, Colorado Avalanche and Minnesota Twins.  You can connect with BROS via the following links.  Photo credit: Mat Dunlap.