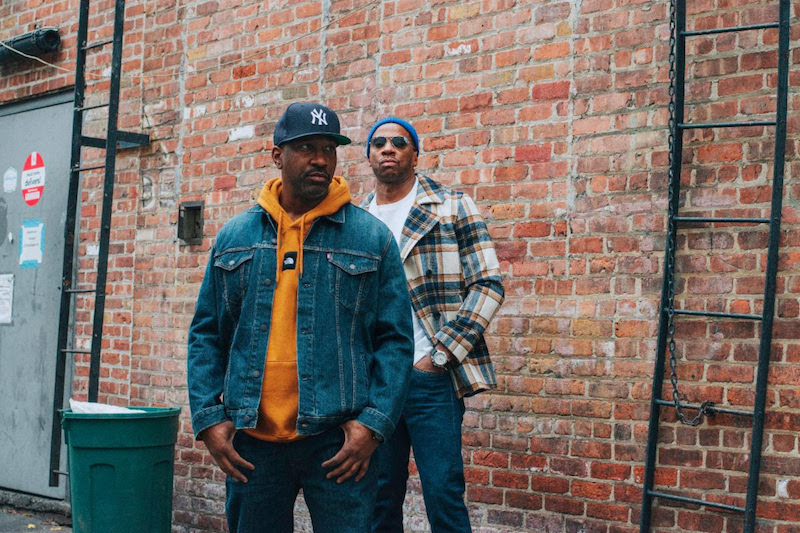 Brooklyn-based producers/songwriters The FunkLabb – Ed Lawson and Wes Davis – has once again teamed up with singer, songwriter, and background vocalist Myah Marie for their latest single “Pretty Please.” Propelled by a symphony of horns and thumping bass, the funk-infused 70s inspired track features TV personality Ruba and rapper Young Dinero Banks with an appearance by Sarina The Violin Diva. Today, The FunkLabb has released the accompanying music video for “Pretty Please,” a continuation to the intergalactic video for “Mama Said No,” where we find Myah after her alien abduction using her vocal abilities to lure her captors and, with the help of her talented friends, plan their means of escape.  “We developed this track specifically for Myah with a live feel in mind using horns, live strings, and bass, knowing she would definitely complete that vision,” shares Wes. “Myah killed it again! ‘Pretty Please’ also features Ruba, who brought a taste of his giant personality to the track, and Young Dinero Banks who puts the exclamation point on the joint with his dope verse!” On the video, Ed adds, “The video for ‘Pretty Please’ shows what happened to Myah following the video for ‘Mama Said No’ after her abduction to outer space. We’re giving you something different from the mainstream norm – get ready!”  “When The FunkLabb sent me the track for ‘Pretty Please’ I was so thrilled, the track was undeniably catchy and fun without any topline on it!  I was inspired right away and wrote it pretty quickly,” shares Myah who is a lyricist and background vocalist behind many top artists such as Britney Spears, Miley Cyrus, Selena Gomez, and Avicii, among others. “This one is just about being super into someone and just coming out and saying it!  As a woman (in my experience), sometimes it’s hard for us to admit we like someone or we have this fear of coming on ‘too strong’ or being perceived as ‘crazy’ and with this concept I kind of wanted to play with really just being up front and admitting my interest. (It’s hard to do in real life!!) I love this video because it’s so campy and crazy and the second follow up to ‘Mama Said No.’ I’m really looking forward to the release of this video and to share it with everyone. Tune in to see what happens next!!”

Funk suggests more than a sound. It implies a whole lot of attitude, slick swagger, and serious soul and you feel it just as much as you hear it. The FunkLabb cooks up music in this spirit as they uncork a timeless groove ignited by fresh fire. Since meeting nearly three decades ago crafting music behind the scenes for everyone from legends such as The Notorious B.I.G.and Will Smith to R&B favorites Sharissa and Allure, The FunkLabb now step into the spotlight. Evolving their collaboration into an artist development hub with various artists leaning on their expertise, wisdom, guidance, and studio prowess, the group are gearing up to release a series of independent singles in 2021, beginning with “Mama Said No” and “Pretty Please.”  Feeling like something was missing from music, The FunkLabb collectively incorporate elements from their past catalog and eclectic taste as they aim to bring back the excellence and musicality needed to remind listeners of how a song makes you feel. Ultimately, The FunkLabb represents the culmination of a lifetime dedicated to music and a bold new chapter.

ABOUT MYAH MARIE:
Billboard & American Top 40 charting songwriter and vocalist Myah Marie has amassed over 20 million global Spotify plays as a featured artist on tracks such as RuPaul’s “Adrenaline” and viral Tik-Tok sensation “LEGS” by Lucian Piane. She is the lyricist and background vocalist behind many top artists such as Britney Spears (14+ songs), Lil Wayne, Miley Cyrus, and Selena Gomez, in addition to collaborating with a myriad of artists including Erika Jayne of The Real Housewives, Hailee Steinfeld, AJ Mitchell, and Digital Farm Animals. As the lead singer of the band My Crazy Girlfriend (Capitol Records), she has toured across the country performing alongside notable acts such as Charli XCX, Jason Derulo, and Icona Pop. Myah is presently working on the next phase of her career, which includes developing, coaching, collaborating and consulting for new artists with budding careers, while continuing to refine her own unique sound.
You can connect with FunkLabb via the following links.  Photo credit: Paulo Cesar Salazar:
Instagram | Twitter | Spotify | Apple Music | YouTube | Website