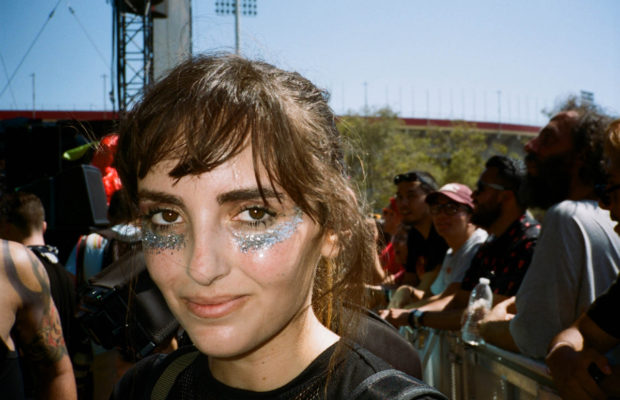 At just 19 years old, Natalie Somekh has gotten to work up close and personally with some of the biggest artists out there from Drake to Grimes to A$AP Rocky and everything in between. We recently sat down with Natalie to discuss how she went from photographing DIY shows to working for the Observatory in Santa Ana, CA, to touring the country with Mt. Eddy.

Growing up I was kind of a loner. I was different in many aspects. That’s when I got immersed in music, and it helped me feel less alone. In High School, I was an editor for the Yearbook staff. I would photograph everything from sporting events to the performing arts division. I began making friends through photography because it forced me to come out of my shell. I met some amazing people, and a few just happened to be in a band called Badlnds. They asked me to shoot their show in a backyard. That’s when I got hooked. I shot in the DIY scene for a while, shooting events in backyards and at The Smell, then eventually moved up to shooting bigger shows for local publications. Unfortunately, Badlnds isn’t a band anymore, but I am forever grateful for all they showed me.

My first show ever was a backyard show with a couple of local bands. It was a lot of fun, but I still had a ton to learn. If I could give my young concert photographer self-advice it would be to shoot in RAW and make sure the settings are on manual. Also never ever leave your gear in your car. People are assholes and will steal it.

Who are your photographic inspirations and how would you describe your shooting style?

Annie Leibovitz and Richard Avedon are definitely my favorites. Pooneh Ghana, Neil Krug, Davis Ayer, and Ellie Pritts are really inspirational. I’m not sure how to describe my shooting style. I’m really into the look of film, so I feel like my editing style sort of emulates that. I love bright colors as well.

Out of all of the photos in your portfolio, which photo are you most proud of and why? What is the story behind it?

There’s this photo I took of King Krule during Beach Goth 2016. It’s probably one of my favorites. I remember hiding backstage and watching through the railing as Archy knelt down yelling. At the moment I recall getting upset while thinking I missed the shot because I didn’t get it at the correct angle and framing I wanted. Later, I realized it was a pretty solid photograph. Now it’s King Krule’s Facebook photo.

Currently you’re working with Mt. Eddy — how would you describe being a touring photographer? What are the highs and lows? What does a typical day on tour look like?

Just wrapped up tour! I love those guys so much. Being a tour photographer is honestly so much fun. The highs are the memories you make. You and the band become like family when you spend THAT MUCH time together. We had some crazy experiences like driving through a sandstorm in Tucson, AZ. We all got notifications on our phones from the National Weather Service to “PULL ASIDE STAY ALIVE.” Ehh, we just drove right through it because we had to make it to the gig. There was another time when we were checking into a hotel after a long night of driving, and our rooms were infested with bugs. We slept in them anyways, but seriously, Days Inn, fuck you. Shoutout to Buc-ee’s in Texas and Topo Chico, they were a life saver.

I live in New York, and the atmosphere here is kind of insane in the photo world. Music photography is booming — as I’m sure it is in California as well — and the competition is getting harder. So, what is the music photo industry like on the West Coast?

Some people argue that social media is a good thing while others argue the opposite. I’m curious to know what your opinion on social media is as a photographer and what role it plays in your career? Do you rely on it a lot or not so much?

I HATE social media, but in a way, it has benefited me by helping my connections grow and getting my work out there. I’ve met some badass photographers through Instagram. I don’t post my work on Twitter though I probably should. I’m addicted to social media, but I hate it. Isn’t that ironic?

Oh boy. I remember going to concerts when I was younger and seeing photographers in the photo pit. I would think to myself, “How do they do that? I want to do that.” The thing is, anyone can do it. All you need is a camera and an outlet. If you are getting started, reach out to small blogs or newspapers at your school. You just have to ask. That’s all it takes. Also, don’t get discouraged if your photos don’t come out exactly how you want them to the first time. They’ll get there. Just be patient.