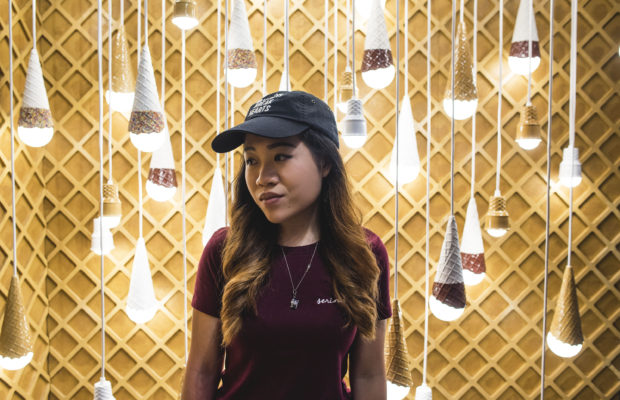 After taking a photography course in high school, New York-based photographer Audrey Lew decided to take her love for photography to the next level, kickstarting her career that eventually led her to working for idobi Radio and doNYC. In a recent interview with Audrey, she shared how she found her unique style and the simple things all photographers should do to help build their portfolios and refine their skills.

I’ve loved photography since I was 4 years old. I carried around a film camera and took photos while on family vacations, but I really dove deeper into it after taking a photography course in high school.

The first show I ever photographed was a local show at this placed called Rogue Studios. All of my favorite Long Island bands played a set so I couldn’t not bring my camera to it. My first legitimate show (with a photo pass and barricade) was Honor Society with Katelyn Tarver and Action Item. I wouldn’t change a thing because that opportunity helped shape me as a photographer. It gave me insight into how the music photography world worked outside of local club/bar shows.

I would like to think that my images capture the atmosphere and emotion of a band/an event/show. I always try to look for a perspective at a show that people may not think about photographing. There can be a lot of emotion in aspects of a show aside from the band on stage. I photographed a lot of sporting events over the years and often some of the best shots I got weren’t of players on the field, but it was the crowd reactions and those sitting on the bench. I apply that same thought process to concerts as much as I can.

As far as editing goes – I like keeping  my photos clean, crisp, and vibrant. However, if an artist prefers a certain aesthetic photo wise, I like to do my best to match that, but put my own twist on it.

You have photographed a number of bands over the years, is there a band/artist that you particularly enjoy photographing the most/ have some of your favorite images of? If so, who and why?

Photographing an artist like Carly Rae Jepsen or Rachel Platten was a dream. I had just gotten my new camera at the time so I couldn’t wait to test it out. I love these particular sets of photos because there wasn’t a single shot I took at either show that was bad. On top of being a fan of both of these artists, the production for these shows were incredible. There’s just something about a pop concert that leaves you feeling excited. Plus, you can feel the energy radiating from the photos alone.

Man, that’s a tough one. I have to say either my photo of John  Mayer or Alicia Keys. I got the opportunity to shoot The Roots Picnic’s inaugural year in New York this past fall and it was the most incredible experience. Being able to not only see such legendary and talented artists of my time, but to also photograph them was something I never thought I would be doing. Both of these photographs helped serve as a reminder that my dreams and goals were attainable and valid.

You have worked with a number of companies including idobi Radio, doNYC, and Nickelodeon. Has there been a particular assignment/project you have worked on that you are especially proud of. What was it and why?

Each of these companies have allowed me to be part of different projects that have helped open my mind and challenge me. It’s hard to really pin point one, but if I had to choose it’s definitely my “Day In The Life” features with idobi Radio that I’m especially proud of. I started these roughly a year ago after creating behind-the-scenes content for the band Pentimento. I decided to pull together a feature for them because I wanted to give my friends an extra push press wise. idobi Radio asked if I was interested in doing more after that piece (shout out to Sherin at idobi). Now, I’ve done about 10 since then and it has snowballed into something I never thought it would become. I’ve received so much support from people across the industry on this and I truly am at a loss for words on how well this has been received. Above all else, this particular project has allowed myself and others learn about their favorite artists on a level you don’t really get to see in a 15 minute interview. I think that’s why I’m so proud of these…because I’ve been able to show a side to these artists that not many people get to see by interacting with them in a way that has allowed them to open up.

I definitely do try to separate myself from the group not because I want to stand out, but I want to be able to inspire other creatives. Something I do differently could help spark an idea with somebody else or even push them to try something new. I think it’s important to realize that creating your own path is crucial.

As a photographer who is very active on her social media accounts, what importance do you feel social media websites such as Twitter, Facebook, and Instagram hold in your career and the career of photographers around the world?

Social media has played a crucial role in my career. It is such a huge asset to photographers around the world.  It helps you connect with other creatives as well as bands, labels, brands, etc. As long as you’re smart about how you use it, it’ll take you far. Personally, being so active on social media has connected me with people that I now call good friends of mine.

Never be afraid to ask for something. If you don’t ask, you don’t receive. The worst that somebody can say is no. Support your local scene and other artists. Go to shows at dinky bars with no lights and a stage that barely fits the band. It’ll push you to be creative  with how you shoot and learn how to use light to your advantage. Above all else, stay humble, work hard, and be yourself. Be kind to others – there is so much strength in this community and it can take you far if you’re just genuine to the people that support you.

Photo of Audrey by Bri Morrell