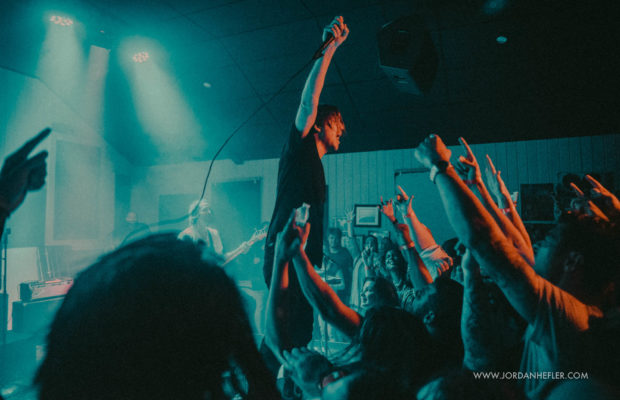 Despite the 90+ degree heat and insane humidity, rock bands Tigerwine, My Epic, and As Cities Burn rolled through Baton Rouge, Louisiana last week to perform to an overly sweaty and  packed crowd at the newly opened Mid City Ballroom. The ballroom is about a 300 cap venue that’s BYOB, and has a DIY feel while still being an organized venue with a stage and lighting. Between the BYOB aspect and the deep ties that As Cities Burn has in Louisiana, this show tested the capacities of the venue and displayed a rowdiness that can only be associated with an ACB concert.

Colorado based band Tigerwine started the show with a heavy and gritty sound, reminiscent of post-hardcore while still having a garage band grunge edge. Energy from the crowd began to build by the time My Epic hit the stage, with many fans shouting lyrics back at the band and showing signs of worship.
As Cities Burn has such a huge fanbase in the Baton Rouge area due to the fact that the band originally started in nearby Mandeville, Louisiana. Whenever they have a show in the area, it is guaranteed to be a packed out and wild time. The night of July 1st was no exception, with crowd surfing, stage diving, and moshing in excess. The band came in hot with their hit “Bloodsucker Pt. II” and the energy in the room just swelled to huge heights. Brothers and vocalists TJ and Cody Bonnette alternated as the songs with and without TJ, the screamer, weaved throughout the setlist. The band played a few brand new songs as well, and the crowd didn’t skip a beat with their response. ACB even helped orchestrate a proposal for two fans on stage mid-set! The night was overall a sweaty and high-energy experience that the venue probably hadn’t seen before! You can catch As Cities Burn on tour with My Epic and Tigerwine through the end of this week in St. Louis today, Urbana, Illinois tomorrow, and ending in Louisville, Kentucky on July 7th. Official tour dates here.