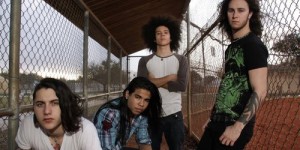 Hailing from Miami, Florida, Black Tide has been on several tours with bands such as Avenged Sevenfold, All That Remains, and Lamb Of God. With one album and several tours down their belt, they are ready to release a new album in early 2011. Black Tide recently released a two song EP, which features two tracks off their new album called Bury Me. This band is filled with amazing vocals, catchy guitar parts, and solid drumming. Be sure to catch them on the Bullet For My Valentine Tour when it comes to a city near you!