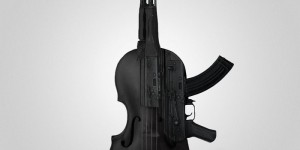 Fans of Las Vegas band The Cab have been eagerly and patiently awaiting the arrival of the band’s next studio album and let it be known—this album is definitely worth the wait. Known for having different musicality than other bands in their genre, The Cab has put forth their second full-length, Symphony Soldier, after three years of tweaking, perfecting and making this album what it is. Fresh off the Gimmie Summer Ya Love tour with All Time Low where they played some of the songs from the album, Symphony Soldier was released on August 23rd, and trust me, it’s an album that you’re going to want to pick up.

A while back we were given a little ‘teaser’ of what songs on the album would sound like when the band released “Temporary Bliss”, which is one of the stand out songs on the entire album. Lead singer Alex Deleon has a very distinctive and powerful voice, and Symphony Soldier picks right up where Whisper War, their 2008 debut, left off. The Cab manages to make music that’s not only catchy, but extremely easy to get into and that sounds different from a lot of other popular bands today. If there were people that had listened to The Cab before and hadn’t gotten into them, then Symphony Soldier is that album that could bring them back.

The album has a wonderful balance between different types of songs—from the very first track, “Angel With A Shotgun”, we’re drawn into the album immediately by the lyrics (“they say before you start a war/you better know what you’re fighting for”) and each track melds seamlessly into the next, a consistent theme and sound throughout. Songs like the piano-infused “Bad”, “Animal” and “La La” are upbeat, feel good songs whereas “Temporary Bliss” is belted out as a standout anthem on the album. “Lovesick Fool” is the softer, ‘ballad-type’ song that everyone would be looking forward to on this album. The album closes out with “Living Louder”, a song with some of the most powerful lyrics out of all the songs, with lines like,  “When you got your breath inside your head, everyday’s a second chance / If I wake up with a beating heart, will I stand or will I fall apart?”

Through and through, Symphony Soldier is The Cab at its best. This album is cohesive and beautiful from beginning to end, an album that everyone should go purchase and add to their collection.