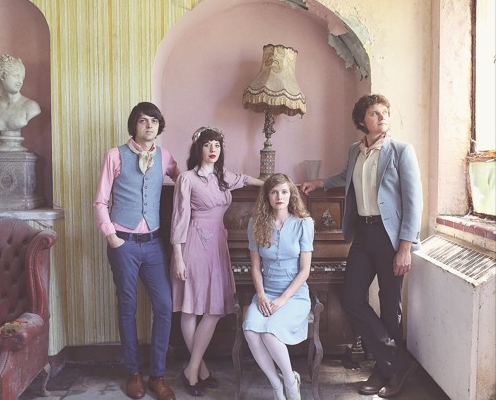 If you’ve ever seen a Quentin Tarantino film, you know that the music is essential for setting the tone for Tarantino’s protagonist. The sound is psychedelic, dark, and just a little bit lovely. Like Tarantino’s films, a macabre, artistic world awaits listeners on Tele Novella’s newest album, House of Souls. If you close your eyes, you can see the painting the band has made: a hot, sunny day in the Texas heat, surrounded by danger, your only salvation lies in this four-piece kaleidoscope on horseback, fearlessly coming to your rescue.

Tele Novella formed in 2013 as a result of ‘happy accidents’ and developed a dreamy sound that new listeners will instantly fall in love with. Members Jason Chronis (bass, vocals) and Matt Simon (drums) are both former members of Voxtrot, while guitarist and vocalist Natalie Gordon is the singer of Agent Ribbons. Keyboardist Sarah La Puerta rounds out the group and provides an ethereal element that can be heard throughout the album.

“Sacramento”, the first track, immediately sets the tone for the rest of the album: pleasant yet punching melodies accompanied by lyrics that beg the listener to turn the volume up even more. The album remains cohesive until the end, but “The Snake that Swallowed the Elephant” encapsulates everything the band sets out to accomplish. Natalie and Jason’s harmonizing vocals share the spotlight with the bands fluid melodies, often changing the song’s direction from a fairytale to a tale of warning.

House of Souls reminds listeners why music is not only an auditory experience, but a visual one as well. Often lending itself to the world of film noir, Wes Anderson, and spaghetti westerns, it’s impossible to listen to this album without an array of bright lights and colors flooding your mind. While the album may not be perfect (it sometimes stray too close to generic pop), Tele Novella have created a record that stands on its own and could provide a beautiful soundtrack. Tarantino, take note.