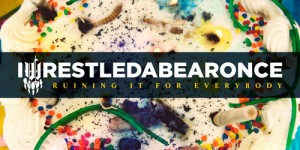 Iwrestledabearonce’s sophomore album is called “Ruining it For Everyone” which many people claim they’re doing to the metal music, but while “ruining” one genre they’re on their way to creating another. Like it or not music lovers everywhere are claiming the metal is dying, well nothing left to do, but pick up corps and mold it into something. That’s what iwrestledabearonce has been trying to do since they started. Of course when ever creating something new there is a period of trial and error, with a lot of error.
For the past few years iwresteledabearonce have tried to create a blend of music styles (techno and jazz, to name a few) around a basic metal sound. Comparing “Ruining it For Everyone” to the bands first album “It’s All Happening” it’s cleaner and more organized. While the bands lyrics and silly track titles don’t differ much from their first album the music itself is a big improvement.
I don’t believe that iwresteledabearonce should be put in the category of metal, but there really isn’t another place for them. They’re pretty much the first of their kind and are finally finding their balance. I’m not going to call it a mature album, because I feel like they still have a long way to go. The album isn’t perfect, but the band has so much talent they I know they can do better. I have a lot of faith in iwresteledabearonce.
The album is overall okay, and while cleaning up the mess created by the first album and defined iwresteledabearonce’s style more they still have a lot of work to do before IWABO is considered amazing. “Ruining It For Everyone” as a few catchy tracks which are really worth checking out. (“Deodorant Can’t Fix Ugly”; “Break It Down Camacho”; “Karate Nipples”.) It is something to listen to if you’re sick of all metal bands sounding the same or just looking for something different. The band has plenty of room to grow and mold their new genera. If they stick with same style in the future and keep it original and make even better than it is now, twresteledabearonce could probably be considered modern music pioneers.
By Sarah Lozano
Website | Twitter | Facebook | Century Media