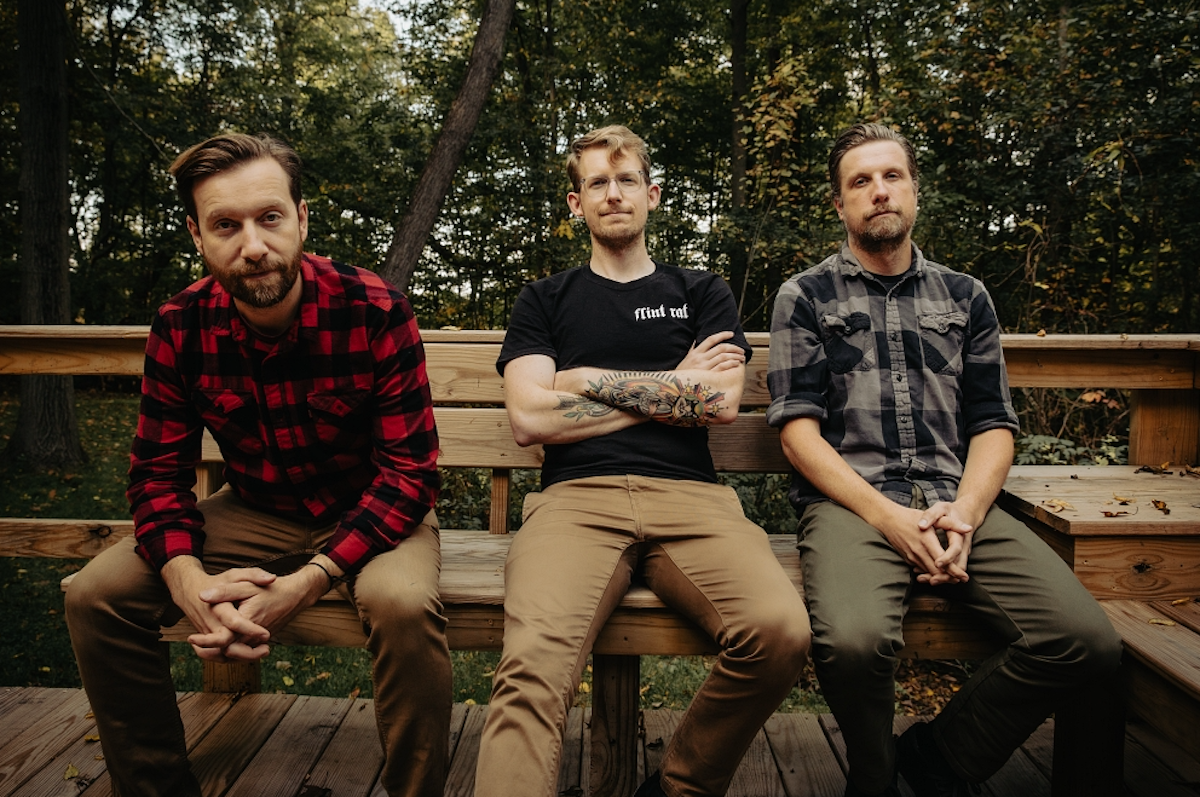 MI’s 84 Tigers — consisting of Mike Reed (guitar/vocals), Ben Reed (bass), and Jono Diener (drums)– debuted their music video for “Great Basin” on No Echo. The song, which first premiered on Brooklynvegan in May, appears on the band’s upcoming debut LP Time In The Lighthouse, out October 21 on Spartan Records. After years of perennial touring and releases with their previous critically-adored outfits, Small Brown Bike and The Swellers, 84 Tigers has emerged as the three musicians’ primary creative outlet in music. Time In The Lighthouse was recorded with Marc Jacob Hudson (Against Me!, Taking Back Sunday) at Rancho Recordo in Michigan.

Of the track, Reed says, “With this one we tried to capture some of the energy of being stuck in a storm. It’s about those massive environmental forces and how we’re constantly in a push and pull battle with the elements. The idea was to create a song that had that energy, and feels like you’re in a race against something, teetering on the edge.”

“I’m really proud of how the record turned out,” Reed adds. “Everything felt organic and natural, from writing to recording to mixing. We just followed our gut and didn’t overthink it, hoping to capture some of the urgency and intensity in the songs.”

There are over 200 shipwrecks sitting at the bottom of Lake Superior’s Shipwreck Coast, a treacherous 80-mile stretch of shoreline at the top of Michigan’s Upper Peninsula. Each wreck serving as a time capsule of how unforgiving and brutal nature can be. 84 Tigers’ debut album Time in the Lighthouse feels like a hurricane of nature at times — crashing, shifting, and moving with an intensity that only Mother Nature can create, then suddenly transforming with big, open melodies, creating a sense of the clouds parting after a massive storm on the seas. “Since day one with this band, we wanted to keep an open mind creatively and let the natural chemistry between the three of us take it wherever. The most important thing was whatever song we were working on at the time, finding the right dynamic and tone,” said Mike Reed, 84 Tigers’ singer and guitarist. The trio immediately bonded, having gone down a similar path of pursuing a dream, making a splash, then exiting when the time felt right. As Diener noted, “The pandemic changed the way we all looked at music. For once it wasn’t about the next tour, or the next show. We had to laser focus on the music, so that’s exactly what we did. I’ve been a big fan of the Reed brothers’ projects for years, so it’s incredible to be a part of one. It’s also odd — the immediate chemistry we had when it came to writing and playing together. It’s not often you find people who have a built-in shared brain for that kind of stuff.” 84 Tigers officially formed in early 2021 based on demos Mike had been working on through 2019/2020. In October 2021, still unannounced to the world, the band recorded with Marc Jacob Hudson (Against Me!, Taking Back Sunday) at Rancho Recordo, deep in the woods of Michigan. The result is an intense and driving 10-song album that blurs the lines of post-hardcore, punk, and 90s alt-rock into the band’s own sound.

Time in the Lighthouse perfectly captures the juxtaposition of its point of origin — layers of grit and weathered textures surrounding a core that is authentic and approachable, and thematic content that balances subtle nods and explicit references to the enduring and industrious spirit of the midwest. “Kingdom of One,” the album’s opener, starts with a dark, electronic rhythmic pattern, leading to Ben Reed’s signature bass grind over Diener’s driving drum textures. The song builds and grows to a crushing verse/chorus, lead by Mike Reed’s discordant guitar and shouted, anthemic vocals. “Tides Will Lead” smashes into a full-on, 90s AmRep-style rager, complete with a start/stop guitar riff that would make Page Hamilton proud, then shifts into chaotic, yet controlled choruses propelled by booming drums that end with a fist-pumping, double-vocal shout delivered by the Reed brothers. “Great Basin,” another standout track, is a mid-tempo, melodic yet noisy ripper that speeds along, finding a line between hardcore and punk, effortlessly blurring the two genres into one. Both heavy and anthemic, the song directly references the harsh and historical realities that shaped the record, while capturing the palpable chemistry of the band without a wasted note. Then the clouds part with the melodic and soaring “Atlas Fractured,” starting with a few seconds of guitar, then bursting open, taking the album into a new atmosphere, full of blue skies and sun. Clocking in at only 2:17, it’s a frantic and pulsing ride, capturing the live energy of the record. The album’s closer, “Over and Down,” lumbers at a heavy and foot-stomping pace, layered with a melodic hook that sticks in your head for days, punctuated by steady and focused choruses lamenting the helplessness sometimes felt in modern times. For some, the challenges of the last several years have required a new level of endurance and grounding, but for others, the durability required to obliterate obstacles is something that has always been embedded within. Because when you’re from Michigan, you don’t give up. You go until the wheels fall off. 84 Tigers have bottled this lightning on Time in the Lighthouse, and the album has arrived at a time when a message of resiliency could not be needed more. You can connect with 84 Tigers via the following links. You can pre-order the new album HERE. Bio taken from press release.