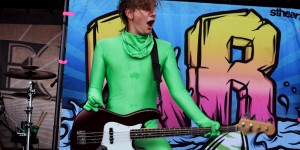 The last date of Vans Warped Tour 2011 is definitely a memorable one. I had to wake up at 4:30AM after four hours of sleep, a previous exhausting day at Warped Tour, and then endure a six hour car ride down to Hillsboro. As the venue neared, the traffic became heavier and it was apparent that it was going to take a while to get into parking, go get credentials, wait in the line, and get into the venue.

Washington County Fairgrounds was a simple venue, pretty much flat (take that, Gorge!), and it big enough that all the stages and tents fit without being too far apart. Although one thing that peeved me off, the lineup’s were extremely messy and unorganized. We were stuck standing in a mob of people for a good thirty minutes.

I was able to catch quite a lot of bands that day even though that’s what I wasn’t set out to do in the first place, but I’m not complaining! One band in particular that caught my attention was Enter Shikari. They really know how to bring the energy levels up and get to crowd pumped! Falling In Reverse played the last set that I saw, at 8:00. They played the most phenomenal set bringing a great live sound and performance. Turning around to see fans genuinely happy and singing at their top of the lungs sent shivers down my spine. For one of their first five live shows as a band, they were amazing.

Earlier that day I was also able to watch the whole We Came As Romans set. It seems that every time I see them live they get better and better. Not only did they play a great set, they also set out to entertain the crowd. During the first few songs water guns were brought out and sprayed at the crowd, and Andy Glass (bass) played in a green morph suit, then spent the rest of the day in it as well.

This year’s Warped Tour really set the bar for what to expect in upcoming years. All the bands were beyond great and they all brought something unique in their live sets.

Below are pictures of: We Came As Romans, Destroy Rebuild Until God Shows, A Day To Remember, A Skylit Drive, Attack! Attack!, Enter Shikari, Every Avenue, Falling In Reverse, Go Radio, The Devil Wears Prada, and The Word Alive.