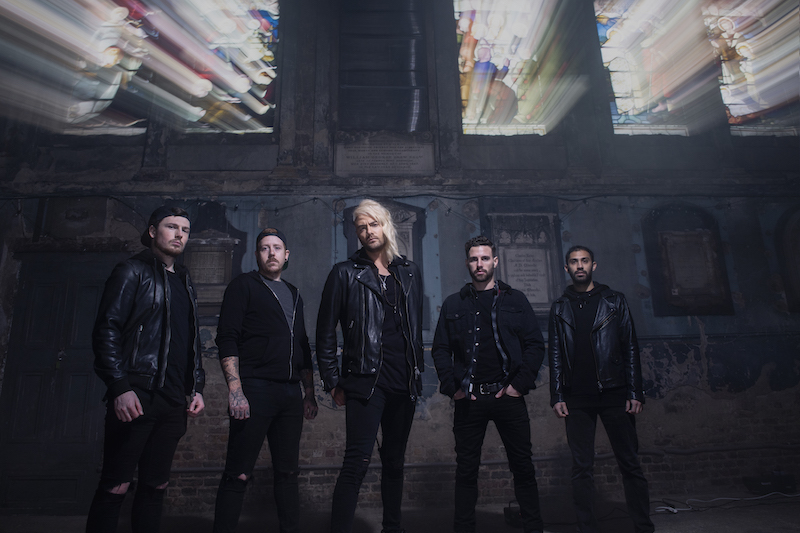 “We could all tell early on that “As The World Stood Still” leant itself perfectly to this kind of stripped back acoustic treatment used for Exile. As soon as we performed it live for the first time, we knew we had something special.”
The Raven Age recently announced their new album Exile, out September 17 via Explore1 Music Group/EX1 Records. The album consists of 11 tracks including 2 new original songs, plus reimagined fan favorites from their 2019 release Conspiracy. Exile also features hand-picked live tracks from past shows in Chile, Canada, the United Kingdom and the United States. Track one and lead single “No Man’s Land” is out now with an accompanying lyric video here. Exile is available to pre-order now, including exclusive artist bundles with limited autographed copies via the band’s online store at https://theravenage.lnk.to/exile.  The Raven Age have also announced their streaming event The Year The World Stood Still. The show will be taking place on Thursday, September 16, in celebration of Exile’s release. With the ongoing pandemic complicating travel plans, the band wanted to ensure that fans all around the globe could experience the Exile premiere firsthand. The band will be accompanied by a string quartet and pianist and the night will include a live Q&A session with The Raven Age. Tickets for The Year The World Stood Still are available now here.
“Deep into that darkness peering, long I stood there, wondering, fearing, doubting, dreaming dreams no mortal ever dared to dream before.” – The Raven, Edgar Allan Poe
The Raven Age are as brilliantly catchy as they are deviously heavy, delicately balancing classic and modern metal influences with an alt-rock twist. Their latest opus traps lightning in a bottle and laces cinematic flavors within concrete heaviness in a way very few have done before – dragging the listener deeper and deeper inside their dark dystopian reality. Truth be told, this is a band that are every bit as explosive as a blockbuster movie.  Put together as a passion project, The Raven Age’s newest album Exile breathes a new life into tracks that have already made their mark, further highlighting the band’s versatility and depth. Two new tracks make their appearance on the album, “Wait For Me” and “No Man’s Land”, and act as a homage to current state of the world. From the height of their game in 2019 to having the rug pulled out from under them with the pandemic in 2020, Exile is the perfect bridge between what was and what is still to come.  The proof, as they say, is always in the pudding. With the success of their previous album Conspiracy reaching over 30 million streams worldwide, putting out a Top 30 Billboard Radio track, and storming UK arenas opening for Alter Bridge & Shinedown, and now a global pandemic, The Raven Age have risen to every challenge thrown their way and look primed for metal glory. Get ready for the year of the Raven.  The Raven Age is Matt James (vocals), George Harris (guitar), Tony Maue (guitar), Matt Cox (bass), and Jai Patel (drums).  You can connect with The Raven Age via the following links.  Photo credit: John McMurtie.
Website | Facebook | Instagram | Twitter | Spotify | iTunes/Apple Music | YouTube | Deezer