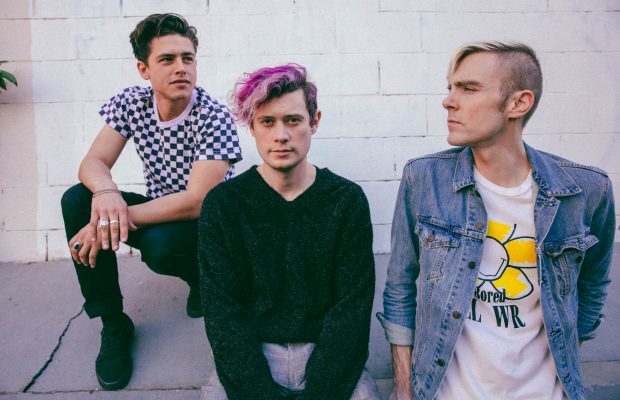 2019 has been a big year for Brooklyn-based alternative band DREAMERS. The band released a full-length album and spent their summer on touring the nation with 311 and Dirty Heads, then soon after the tour ended they announced a headlining tour for the fall. DREAMERS is probably the most versatile band that has come out in the past couple of years. The trio came together from playing various types of music to come up with a sound that is not only alternative to the mainstream, but alternative to everything really. Their unique sound is what got me first interested in them in a way that I hadn’t been into music in a long time. Seeing them perform live and listening to their songs got me out a funk that was just becoming a jaded twenty-something that kept thinking all music sucked. I wasn’t sure what spoke to me about the band when I first heard them, but there something there that I loved.

The band released their second full-length album LAUNCH FLY LAND this spring. Originally was intended to be an E.P vocalist and guitarist Nick Wold explains how it manifested into an album. “We wrote it basically all over. These past few years being all the road a lot we’d get together and have five days off and we’d try to write five songs. We were just creating small batches, which is why we first started to put them out as E.Ps,” Wold explains after I ask about the writing process of the LAUNCH FLY LAND. “Soon we just had a stack that we though were good enough. It kind of took a life of its own.”

“There’s a history about sophomore slump,” Nick Wold tells me about the release of the second album over the phone. “The second album usually sucks, so we worried about that, but our fans loved it.” He laughs. The honest and somewhat blunt no filter comment is something that makes DREAMERS unique to me. It’s a brief moment of honest in sharing and insecurity that the band had, but it’s followed by the confidence that Wold and her band mates radiate that always keeps them interesting.

Understanding that couldn’t be another Land E.P seems like part of bands go-with the flow and following the art attitude which is something that’s admirable and genius in my opinion. Wold, along with bassist Nelson, and drummer Jacob Lee Wick carry themselves well. They’re friendly and cool, calculated, but random. With their established brand and how versatile they are you can’t really box the band in. I talked to Wold about my revelation. I tell him I don’t know what type of music they’re making but I know it’s good. Wold laughs replying “I’ll take the genera, good music.” Then he goes on to explain the bands various inspirations “We all grew up on the Beetles. They have some songs that are dark and sad, but others that are completely not. Songs that feel like giant music numbers. They’re a lot more diverse than a lot of bands. We like to be called rock n’ roll, or alternative. We really like the word alternative.”

I’ve had the pleasure of seeing DREAMERS, open and headline always giving a great performance no matter what, but something I noticed about Dreamers is that I’ve seen them perform with a wide variety of bands. You can pop DREAMERS into any line-up and they will kill it. I asked Wold that was perk to having such a diverse sound. “We really didn’t plan that,” Wold responds “We’ve toured with bands like All Time Low who are more pop-punk and now we’re with 311 and Dirty Heads, this full reggae sound. At first we’re sure it was gonna work, but then we thought about it and Dirty Heads are on all the same radio stations we are. We played and people liked it. I think that today music fans listen to all kind of things which, instead of making their whole personality one specific genera. If it’s guitars and it’s cool, then it rock. We like to mix it up.”

Besides making good music there is no denying that DREAMERS are an eye-catching band. From the bands personal fashion choices, like Wold’s bright colored hair and nail polished covered fingers to their merchandise and how they set the stage the DREAMERS style are just as important as the sound. “Rock n’ Roll to me isn’t just music, it’s a lifestyle and philosophy. The visual side of that is something that really important,” Wold explains. “Of course we want to look good on strange, but also want to show people what we’re about. That’s why rockers wear ripped jeans and we paint our nails to show that you don’t have to a macho-man. We want to put out ourselves and our philosophy in as many ways as we can.”

From the non-musical creative side of things according to Wold the band really does it all. With establishing how the stage should be set for the performances to the look of their merch and album covers. “The moon is our symbol,” Wold tells me as he explains the bands over all design choices. “We’re all into astrology and the cosmic look of things. Overall that’s the thread that keeps everything together for us when we’re making choices.”

I shared with Wold that it’s pretty captivating to see the bands beautiful setup in the tiny venue in Houston, Texas where I typically see them perform. Wold is flattered and I realize this is interview is just becoming me complimenting the band for everything they do. I joke with Nick Wold about this and his response is “The world is full of so much self-doubt that I’ll take it. If I knew more about you I’d probably be doing the same. We have to spread positiveness. But yes, if it’s a stadium or small place we’re going to give you a great cosmic experience, because music is magic.”

As he explains this it hits me hits me that this is what DREAMERS is. Yes it’s the spacey 90’s aesthetic, but it’s all about happiness, sadness, it’s about everything you could ever feel filtered through this magical sound to help us process everything. DREAMERS are both a mystery and something I completely understand at the same time. From their art to their style to their point of view there is so much to uncover, but I get it. And it’s lot for me to keep me interested and fascinated.

FOR MORE INFO ON DREAMERS CHECKOUT