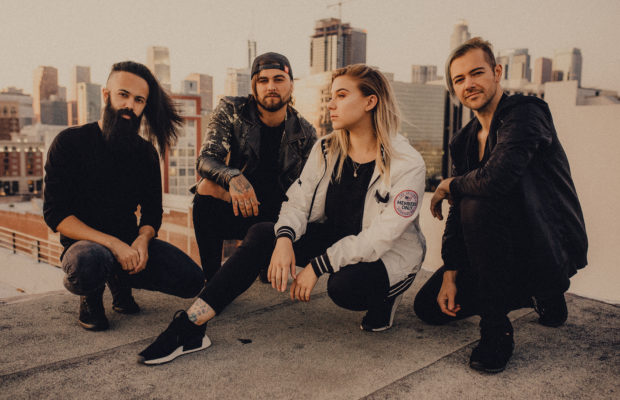 Dark pop-rock powerhouse RIVALS have had a busy year so far. In addition to their current cross-country tour with Red Jumpsuit Apparatus, the band dropped their debut full-length album, Damned Soul, in February via Smartpunk Records. The 10-track banger, produced by John Espy (Red Jumpsuit Apparatus) and Aaron Edwards (Sick Puppies, Elohim, The Cab) with additional writing for drums and mixing/mastering by Cody Stewart (The Browning, Rings of Saturn, Falsifier), was released to great acclaim and has been streamed over 750k times on Spotify in just under five months. Now RIVALS has unveiled their upcoming tour plans as they will hit the road with Assuming We Survive this fall. Additionally, the band will be performing at iMatter Festival alongside  artists including Underoath, August Burns Red, ’68, and Can’t Swim this August.

On the upcoming shows, vocalist Kalie Wolfe shares: “We are going to be touring with some of our favorite people ever over in Assuming We Survive this fall! We will also be playing iMatter Festival with Underoath, August Burns Red, and so many other amazing bands. Underoath has been a huge influence to all of us in the band so getting to play a festival with them is actually the coolest thing ever. Get your tickets and come see us on tour!”

RIVALS is a dark pop-rock band from Los Angeles, CA formed in 2014 by vocalist Kalie Wolfe, bassist Sebastian Chamberlain, guitarist Micket Woodle, and drummer Josh Alves. Driven by Wolfe’s powerhouse vocals and the band’s infectious yet raw sound, RIVALS is fueled by powerful and energetic songwriting, bringing forth a type of fearlessness in their music that stands out among the rest. Since the release of their debut EP in 2015, titled Haunted/Hunted, the band has been making waves and for good reason. Revered by many on their live performance, RIVALS has previously toured the country with bands like Story Untold, Uh Huh Baby Yeah!, and Best Kept Secret, in addition to sharing a lineup with acts like Assuming We Survive, The Word Alive, and Oceans Ate Alaska on the 2014 Vans Warped Tour.

Catch RIVALS on tour with the Red Jumpsuit Apparatus now. The Turn The Stage Tour with Assuming We Survive will kick off this September, with tickets available for purchase on July 20th at noon CST. All tour dates can be found below. To stay up to date, be sure to follow the band on Facebook.