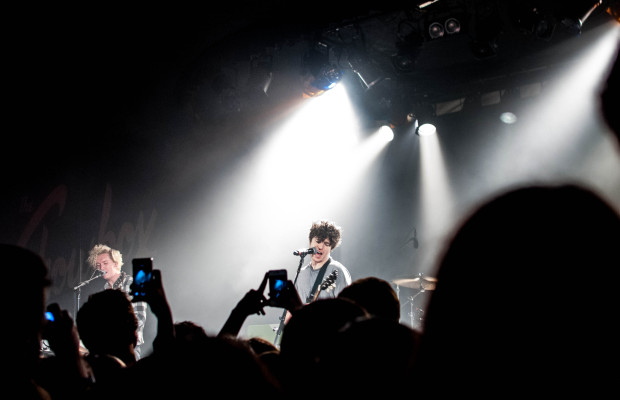 Has it really been three years? I am sure that question crossed a lot of people’s minds as they trickled into Seattle’s renowned Showbox and anxiously awaited for The Kooks to take to the venue’s stage once more.

With a well balanced set list of tracks spanning their entire career, not a single person went home disappointed on that rainy Monday night. Opening with the fast-paced and highly crafted rock song “Eddie’s Gun”, the track was the perfect start to the entire night, letting everyone know that The Kooks were, in fact, back.

The Kooks have drawn in a very unique fanbase for the genre of music they are placed in – whether young or old, male or female – their shows are almost like a family affair. There’s no shoving to get to the front or over the top super fans that are determined to make it known they know every detail about the band. Instead, the crowd joins together to celebrate and experience the music they have fallen in love with over the years. There is definitely a sense of unity that cannot fully be justified by a simple review of the night – it has to be experienced in real time.

“She Moves In Her Own Way” is undoubtedly one of The Kooks’ most popular tracks, the opening chords of the guitar immediately causing the sea of people to break into applause towards the middle of the set. As someone who has been following The Kooks for years and has seen them in the past, their live show is a completely different experience. You cannot truly understand how The Kooks work as a band without seeing them live.

As many music lovers will say, the only way to experience music in the greatest form is to see it being performed onstage in front of you. For The Kooks, their true sense of artistry and talent is displayed far greater onstage than from anything you will ever hear on an album. For songs like “See The World” and “Always Where I Need To Be” that are fast paced, The Kooks display such a great amount of charisma during their performance. Frontman Luke Pritchard is interacting with the crowd, bringing them further into the musical experience while the guitar riffs from Hugh Harris guide the sea of people into singing and dancing along.

It’s during the band’s ballads that the true amount of brilliance held within The Kooks is really seen in full view. One of the highlights of the night was Luke Pritchard’s raw performance of “Seaside”, another fan favorite. With just a guitar, one single spotlight on him, his low and muffled voice throughout the entire song not only showed his stripped down vulnerability, but also allowed for the voices from the crowd to echo off the walls as they sang along. The track was released nearly eight years ago and it still holds so much love for followers of the band, as well as the members themselves. “Seaside” is a great representation of The Kooks’ humble beginnings and the loyalty that their fans have had towards them over the years.

The biggest highlight of the night was easily their encore performance of “See Me Now”. A ballad off of their latest album, Listen, the song is an ode to the band’s struggles over the years, as well as the lessons they have learned. As one of their strongest songs yet, “See Me Now” has a few perfect Kooks quirks to it – it’s beautifully written, honest and well composed. The song allowed for the band’s vulnerability to really show. For just a moment, they weren’t hiding behind uptempo songs or their rocker image. “See Me Now” showed the crowd that while The Kooks have been around for nearly ten years, they are continuing to learn and grow as a band and individual musicians.

While it is still unknown what happened with The Kooks during these past few years, their show in Seattle was a reminder to all of their fans and critics that they are still carrying on with their music and that, even after ten years, their fans have continued to stick with them.With their brand new album, Listen, already being well received by the masses, I think it can be inferred that The Kooks began this American tour with a bit of a point to prove.