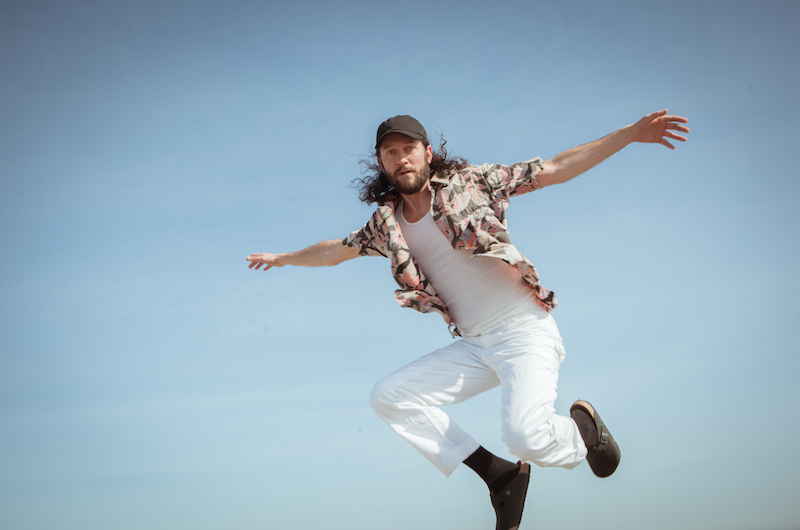 “The seed of “I Saw Love” started from a memory of a bass line of an Arthur Russell song.  As I constructed the song, it became a story of moods, rather than words, like passing through a haunted funhouse of mirrors, traveling from optimism to triumph, despair, and ecstasy,” explains NYC-based indie electro pop artist Michael Tapper of Practice to American Songwriter (who premiered the single/video).  “I Saw Love” is the second single off his debut album Not A Game (out in early 2021).  Formerly a drummer for We Are Scientists, Bishop Allen, Fool’s Gold and Yellow Ostrich, Practice sees Tapper embracing a very DIY aesthetic; doing all of the songwriting, arranging, producing, recording, mixing, and video-making himself.  The first time Tapper had earnestly started working on a solo project was in 2013, after returning home from a 28-day sailing trip starting in Mexico and ending in Hawaii.  Around the same time, he was also delving more into synthesizers, repairing old Juno 106’s and immersing himself in 70’s electronic music.  “I decided I wanted the project to be something I could perform by myself because live performance has always been an important part of music for me, but I didn’t want to just perform to recorded tracks, nor did I want to try to wrangle a band together.  I felt like I could put together a solo live setup with synthesizers and drum machines, but I didn’t know exactly how.  So I started going to my practice space every day, revving up my synths, and constructing the song.”  Thus the moniker of Practice itself was born out of this  self-exploratory toil, along with a connection to the practice of meditation itself.

Another inspiration for his project name was NBA legend Allen Iverson’s infamous “practice” speech, where he castigates the media at a press conference for continually asking him why he had missed some practices, during which he repeats the word “practice” 22 times, and eventually everyone in the room is laughing at the absurdity of it all.  Tapper decided to sample that speech to make a Practice theme song with the phrases “we’re talking about practice, not a game.”  Adding, “As a title, I liked how ‘Not A Game’ sounds like it means it’s serious, not a game.  But in the context of Iverson’s rant, he means the opposite.  It’s a joke that reveals itself to the listener as they get about halfway through the record and hear the phrase in the theme song… but now I’ve ruined the joke for you.”  Some of the songs on Not A Game (like “How Long” and “I’ve Had Enough”) are about feelings and experiences he had on the aforementioned sailing trip, but he wanted to write them in a way that anyone could insert their own meaning into the lyrics and relate to them personally.  Another instance, the first single off the album (“The Afterlife“) released back in August is about the feeling of when, “you’re out at sea and being completely removed from the world, almost in a different universe, just floating through space and time,” but hopefully anyone could relate to it from a sense of feeling uncertain, alone, and afraid.  Following in that sentiment is the striking synth ballad, “Can You Lie To Yourself.”  While the pulsating “I Don’t Need Love” carries a more playful energy, “I was talking to a friend and thought it would be kind of funny to have a song where the chorus was “I don’t need love,” followed with the punchline, “I just need likes.”  She said I should write that song, and so the next day I did. Will the joke hold up? Only time will tell.”

Elsewhere on the album, the synth echoes of “Failure of Imagination” (the first Practice song Tapper ever wrote) carries an especially personal weight.  “It’s probably the song I had been working on the longest, and it’s about meeting my wife at a time when I wasn’t looking for love or interested in love or even thinking that love was possible and feeling like I very well might have missed out on the most beautiful thing I could have ever imagined precisely because I hadn’t and couldn’t imagine it.”  For his full-length, Practice is hoping people can connect with it in “whatever way it may speak to them.  If people want to put it on at a party and dance and talk and have fun with it, great.  If people listen to the words to the songs and feel like they are expressing things that resonate with them, amazing.”  For him, looking back on that once-in-a-lifetime sailing trip, where he personally felt adrift in his life and didn’t come to any particularly great realizations at the time, “even as we were out there sometimes languishing in the doldrums for days,” he says the experience was a “catalyst for clarity and re-imagination.”  You can connect with Practice and stay up-to-date on all upcoming album news via the following links.  Photo credit: Guy Eppel.