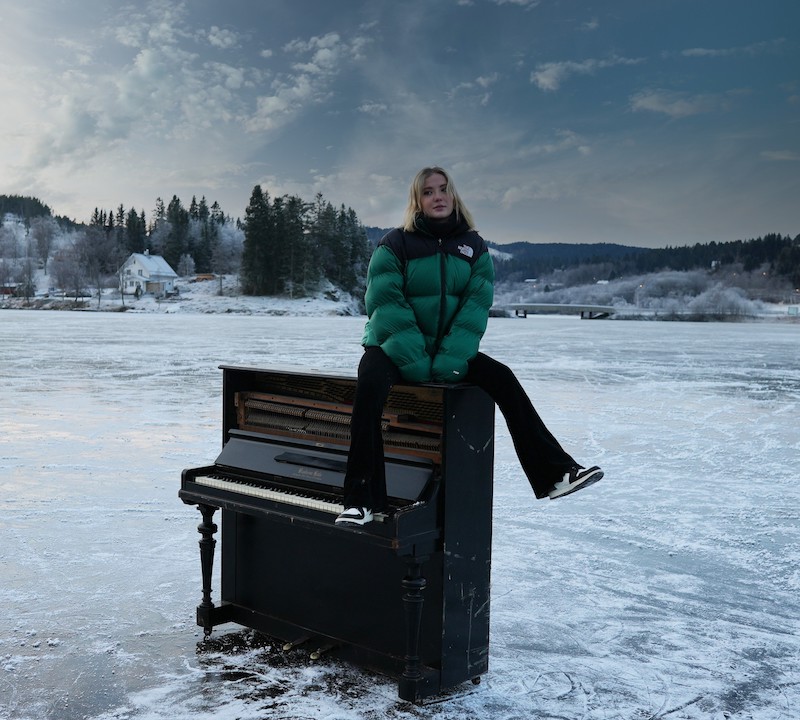 Emerging pop starlet Elise Eriksen has released her new single “Smile,” a stripped-back, powerful ballad which was co-written by Sasha Sloan (Charli XCX, Camila Cabello, Anne-Marie, Katy Perry) and shows a different side to Elise who also plays piano on the track and speaks to putting on a façade and smiling even though you’re not okay.   “”Smile” is about putting on a façade and trying to seem happy even when you’re not,” says Elise on the inspiration behind the song.  “As a teenager, I really connected with the idea of feeling like you can’t always be completely yourself, which I think is something that a lot of people experience.  I want to speak about things that are meaningful.  It felt important to put out something that will leave people feeling more in touch with themselves but also more hopeful and uplifted, especially because it has been such a tough year.”

“Smile” follows the recent release of Elise’s debut single “Less,” which was co-written by multi-platinum-selling songwriter Julia Michaels and features both Shoffy and Blu DeTiger. PRESS HERE to watch the effortlessly cool video for the track which reflects on growing apart in a relationship and shows Elise defying expectations to stand out alongside a cast of her best friends. Already racking up close to a million streams, “Less” saw its shimmering, up-tempo beats and Elise’s radiant, jazz-infused vocals featured on key pop playlists worldwide, including Spotify’s global New Music Friday playlists, Fresh & Chill, Apple’s Pop Deluxe, and many more. The track is also featured on a large billboard in Los Angeles and has received radio play around the world including multiple spins on BBC Radio 1 and BBC Radio 2 – the biggest radio stations in Europe.  Taking shape after a moment of bold determination, Elise threw herself into reimagining an early version of “Less” after hearing her father, GRAMMY-winning producer Mikkel Eriksen toying with it in the studio. Using her near-encyclopedic knowledge of music history and first-hand experience of watching the world’s biggest stars in the studio, Elise transformed “Less” into a shimmering sliver of timeless pop perfection with Julia Michaels’ blessing and attracted collaborators in Blu DeTiger and indie sensation Shoffy. With its shimmering textures and bass-heavy grooves, “Less” finds Elise and Shoffy trading off verses as they reflect on the increasing distance between two partners. But despite its bittersweet mood, the up-tempo track is endlessly brightened by Elise’s radiant vocal presence. “I’m so excited that this song is going to be out in the world! It’s a catchy, soulful record that I love for its upbeat vibe and heartfelt lyrics. I had so much fun making this song my own,” shares Elise. Shoffy added, “Excited to be part of this song! It’s so awesome that it’s Elise’s debut single, and I’m honored to be featured on it. The beat and melody are fun and catchy, and her voice sounds so great on it. I found myself dusting off the bass in the closet and playing along, learning the part. Also, it’s very cool that such a talented group of people are involved – Elise, Stargate, Julia Michaels, Blu DeTiger. I hope people dig it!”

Originally from Norway, Elise moved to New York City soon after discovering her love for singing and is now based in Los Angeles. Learning over the years what it takes to make a perfect pop song, Elise is the daughter of one half of uber-producers Stargate (Rihanna, Katy Perry, Beyoncé, Coldplay) and grew up in the studio surrounded by the world’s top artists and songwriters. Embracing the uncompromising work ethic she grew up surrounded by, Elise devoted years to playing the piano and honing her craft before experimenting with writing songs of her own. Inspired by artists as eclectic as Stevie Nicks, Alicia Keys, Don Toliver, Pink Floyd, and Etta James, the seventeen-year-old’s dynamic musical imagination and sharp musical instincts reflect her endless creative curiosity and a deep commitment to her artistic growth.  With more music to come and a big year ahead of her, Elise is uplifting listeners through her own form of emotionally honest yet seemingly carefree pop.  You can connect with Elise Eriksen via the following links.  Photo credit: Mikkel Eriksen.