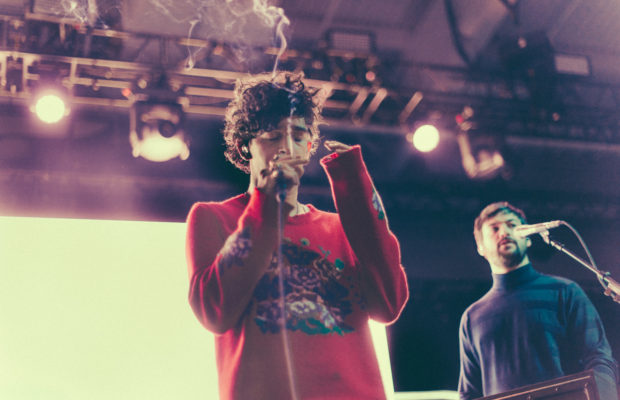 It’s pouring outside when I arrive at Pier 36 in the Lower East Side of Manhattan, but there’s a line two blocks long outside of the venue. I’m told that some of the girls have been waiting on line for at least a day to guarantee their entry into Pandora‘s free Holiday show. They have hats, gloves, and even emergency blankets to help keep them warm in the ever changing December weather. They allow press into the venue earlier than the general public, so I head inside to get out of the rain. About twenty minutes later, the venue doors open to the public, and a stampede remnant of the buffalo stampede in ‘The Lion King’ occurs. The girls who have been waiting and ungodly amount of hours to get into this venue, rush inside like their lives depended on it. Amongst the casualties of the stampede are some gloves, a few hats and an emergency blanket.

As the venue starts to fill up, the DJ duo Snakehips starts to fill the room with an awesome playlist. I explore what the venue has to offer, as Pandora  has a ton of sponsors at the event tonight, there’s multiple photo-booths as well as freebies to collect. The crowd is jamming to Snakehips playlist, and before I know it, it’s almost 8PM, and time for opener Bishop Briggs to take the stage. Briggs, like the other artists playing tonight, hails from London, England. She’s been growing traction in the world of music with her single ‘River’ and while I overhear girls in the front asking their friends if they know who she is, as her set progresses I notice more people singing along to her songs. It’s always really fun to witness concert goers realise that they do in fact know, and sometimes even love, a song by an opening act who’s name they don’t recognise. Briggs‘ stage presence is immaculate, she commands the massive stage, dancing around and making sure that every section of the crowd feels acknowledged. While her set is only 7 songs long, she made a lasting impression, and definitely gained at least a few fans.

Next up on stage is another act from London, Bastille, made up of front-man, Dan Smith, keyboardist, Kylie Simmons, bassist, Will Farquarson, and drummer, Chris Wood. Bastille is a long time favourite band of mine, and I have been lucky enough to see them perform live twice this year in two very different atmospheres. Smith can own any stage he steps foot on, the crowd is transfixed on his movements within seconds into the set. It’s amazing to see how much energy he can retain throughout a full set. Tonight’s show is different than most shows as they play ‘Flaws‘ early on in the set, and this song always entails Dan making his way into the crowd to get up close and personal with the fans. The set is filled with new and old songs, making long time fans as well as newer fans happy. Their stage setup as well as background videos gave everyone in the crowd a taste of what their ‘Wild World‘ World Tour has to offer as well which was a nice preview of what’s to come for them as a band.

The last band to take the stage are The 1975, also natives to England, but these lads hail from The North of England, Manchester, to be exact. The 1975 has become a household name over the past year and a bit, but from the band’s demeanour, you’d never be able to tell that. Throughout their set, frontman, Matty Healy, takes multiple swigs from a wine bottle and even lights up a cigarette mid-song for ‘Change of Heart’. Healy spends a large majority of the set dancing around the stage, his go to move seems to be the kick-ball change. The band are amusing to watch, but sometimes it feels a bit like Healy is taking the piss of the fact that people enjoy his music. Other than his sarcastic and dramatic on stage behaviour, the band’s set is overall a dream. They only got to play 9 songs, which is a much shorter set than most fans of The 1975 are used to seeing, but they filled it with a wide array of new and old songs, and it seemed like everyone in the crowd was enjoying themselves. They close their set with ‘The Sound’, the first time in a long time that they haven’t closed a set with ‘Sex’, which they didn’t even get to play.

As I leave the venue, I hear fans exclaiming about how much they enjoyed the event. From the bands, to the DJ set, to the ball pit photo-booth. Pandora accidentally threw an office Christmas Party meets rich kid prom, and everybody in attendance had an amazing time. Here’s to next year