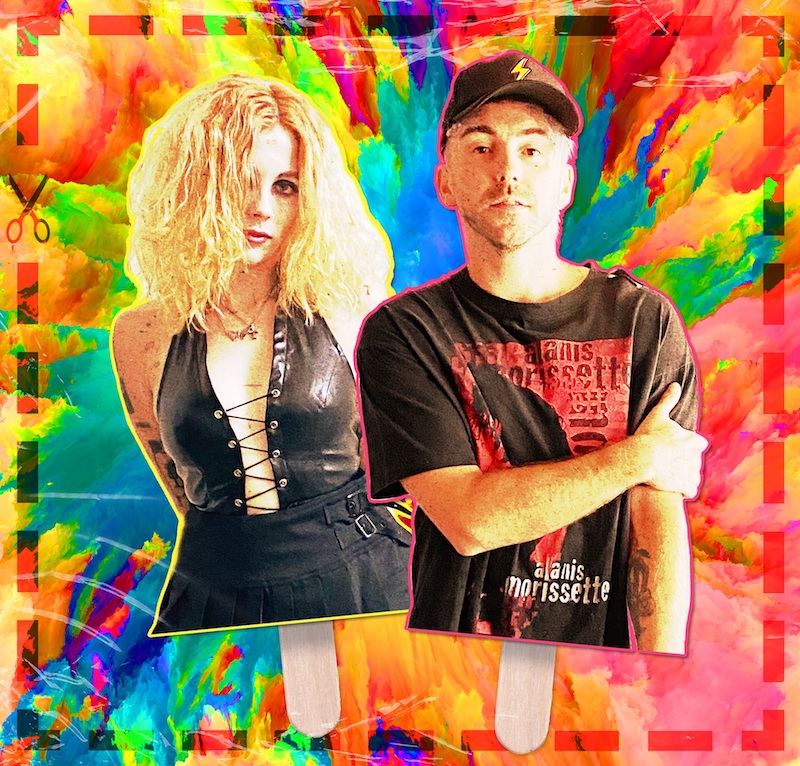 Platinum-selling Fueled By Ramen band All Time Low have shared a brand new single entitled “PMA” (Feat. Pale Waves). The track is available today on all streaming platforms, while an accompanying lyric video for the song is streaming on All Time Low’s YouTube channel. Upholding what has become an undeniable creative partnership in the studio, All Time Low worked with longtime collaborator and producer Zakk Cervini (Blink-182, MGK, Halsey) on the track.  “PMA” hinges on effervescent electric hooks as All Time Low’s Alex Gaskarth and Pale Waves’ Heather Baron-Gracie trade-off melodies as they work through their anxiety.

Gaskarth elaborated on the collaboration, “‘PMA’ is a journey into isolation and overstimulation. It’s about the little mundane things we do to keep ourselves distracted when loneliness becomes a constant and leaves us feeling apathetic. It’s existential dread wrapped in nervous laughter kissed by the SoCal sun. Heather and Pale Waves joining us on this one quite literally brings the hopeful shine to the lyrics, the promise of safety in the shared experience, the understanding we’re all living it together.”

Baron-Gracie added, “I was really happy that Alex asked me to be on the track as I’ve always been a big fan of All Time Low and I loved the song when he sent it over. I really related to the themes, especially the exhausting worry that you’re never doing / being enough in life.”  It arrives on the heels of the band’s latest single “Once In A Lifetime.” It has already surpassed 20 million streams and counting in addition to reaching #5 at Alternative Radio and attracting critical acclaim. NME hailed it as “reflective” and “hopeful,” and KERRANG! dubbed it “dark but typically anthemic and infectious.” Produced by Cervini and Andrew Goldstein [Maroon 5, Katy Perry, blackbear], American Songwriter attested, “the new cut crashes the senses in bursts of color and sound.”

All Time Low will launch their first full-scale tour in two years in August. This Summer, the band will embark on a run of U.S. headline shows with support from The Maine and Grayscale. In the Fall, the band will return to the road for a North American headline trek with support from label mates nothing,nowhere. and Meet Me @ The Altar.  All Time Low will also headline Sad Summer Fest 2021, which kicks off in August and visits US cities throughout the Summer. Additionally, the band is scheduled to appear at music festivals including Chicago, IL’s Lollapalooza and Las Vegas, NV’s Life Is Beautiful. A complete list of upcoming live dates can be found below. All Time Low currently hold two spots in the Top 10 at Alternative Radio, with “Once In A Lifetime” and their smash hit “Monsters” (feat. blackbear). The band recently delivered the network television debut performance of “Once In A Lifetime” on The Late Late Show with James Corden. Watch the performance and interview HERE. Earlier this Summer, All Time Low also earned nominations for both Alternative Rock Song of the Year and Alternative Rock Artist of the Year at the 2021 iHeartRadio Music Awards. Additionally, the band received a nomination for Top Rock Song at the 2021 Billboard Music Awards. “Monsters” (feat. blackbear) notably marked All Time Low’s first #1 at radio and remained in the top spot of the Billboard Alternative Airplay Chart for an unprecedented 18 weeks. The band delivered unforgettable network television performances of the song on Good Morning America, Jimmy Kimmel Live!, and The Ellen Degeneres Show. In December, All Time Low welcomed global superstar Demi Lovato to join them on a new version of the track. “Monsters” (feat. Demi Lovato and blackbear) marked All Time Low’s highest positions on the Billboard Hot 100 and Top 40 Radio Chart to date. Upon its release, the track received praise from The New York Times, Rolling Stone, People, and more.  All Time Low’s latest studio album Wake Up, Sunshine was released in April of 2020 and debuted at #1 on Billboard’s Top Rock Albums Chart. Billboard proclaimed, “The album is All Time Low’s most vibrant set to date, combining the band’s rambunctious spirit with roaring guitars and anthemic melodies.” Forbes praised the collection as “an album that crackles with youthful exuberance and the energy of a live show,” while Nylon declared “All Time Low just wants their new album to make you feel good.” Check out all of their upcoming tour dates HERE.

Pale Waves recently released their sophomore album Who Am I? which hit #1 on the UK Indie chart upon release and #3 overall. Debuting a softer, more vulnerable look representative of their new, positive mindset, Who Am I? flipped the Pale Waves world upside-down to inject it with acoustic-guitar-laden alternative pop rock energy and a newfound confidence. Produced Rich Costey (Muse, Foo Fighters, Sigur Rós), Who Am I? – the coming-of-age follow-up to the band’s debut album My Mind Makes Noises – opens up a bold new chapter for Pale Waves, who are confidently creating a safe space for people to be themselves and feel comfortable in their own skin by inspiring inclusivity and self-discovery in listeners while exploring themes of mental health, growing pains, sexuality, and falling in love.  From Who Am I?, latest single “You Don’t Own Me” is an empowering, guitar-heavy release of frustration which pushes against misogyny to defend the individuality of women, while “Easy” is an uplifting, shimmering pop anthem about being in love with being in love and how transformative the experience can be. “She’s My Religion,” which premiered worldwide on Zane Lowe’s New Music Daily on Apple Music 1, serves as an atypical love letter which sees Heather embracing her sexuality to represent a queer relationship without hiding behind the clichés of oversexualization or playful experimentation. “Change” is made up of stories of heartbreak from Heather’s friends and was first played as Annie Mac’s Hottest Record In The World on BBC Radio 1.  Pale Waves made an immediate splash when they debuted on the music scene, hitting the Top 10 on UK Album Chart, winning the NME Under The Radar award, making the BBC Sound of 2018 shortlist, touring with fellow Dirty Hit label mates and mentors The 1975 as well as Muse and The Cure, and appearing on Late Night with Seth Meyers. They have performed at Reading, Leeds, Lollapalooza, SXSW, and recently appeared on the cover of Dork Magazine for the third time. You can find all upcoming UK tour dates HERE.

You can connect with All Time Low via the following links:

You can connect with Pale Waves via the following links: