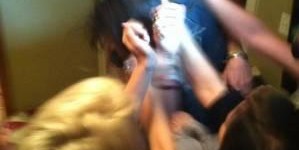 The All-American Rejects will be releasing their fourth studio album in Spring of 2012. They have released a video from the first track that’s called “Someday’s Gone” which you can watch below. Fans can also download the song for free on their website.

“We wanted to give fans an early candy cane for the holidays and this song is the teeth of the record. The video directed by Jon Danovic was conceived in one day and shot the next day in one take. Hope it bites you and gives you a mark.”
Season’s greetings, The All-American Rejects.