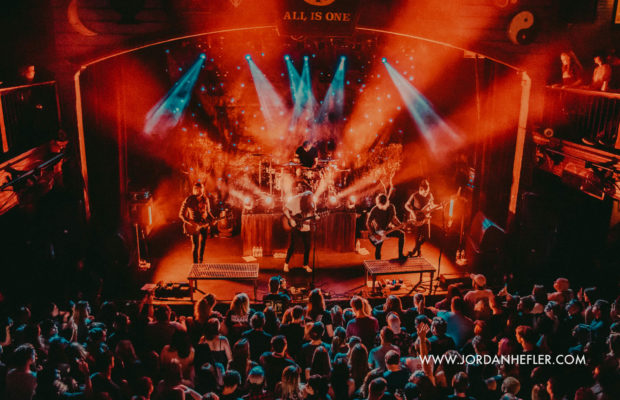 On October 5, Mayday Parade came through New Orleans on their Welcome to Sunnyland tour with special guests This Wild Life, Oh, Weatherly, and Brightside in support of their latest album put out by Rise Records, Sunnyland.

A last minute addition to the tour to replace original opener William Ryan Key (formerly of Yellowcard) Florida band Brightside fit the bill perfectly with their upbeat indie-pop sound. Backed by Hopeless Records, Dallas act Oh, Weatherly hit the stage next and struck an obvious chord with the excited crowd, as their music sounds undeniably influenced by old-school Mayday Parade. It seemed that this band was a natural fit to open for the iconic emo headliner, but was transitioned well by California duo This Wild Life in between. This Wild Life is known well for their acoustic tracks, but they amped up their presence with live drums on some songs. The band performed multiple tracks from their latest album Petaluma and had a tongue-in-cheek approach to discussing the meaning of the album by having an oversized prescription bottle as a stage prop.

Almost every band that comes through the House of Blues New Orleans has something positive to say about playing in the enchanting, cultural city. Frontman Derek Sanders of Mayday Parade was no exception, exclaiming to the crowd how much he loved to play in New Orleans and how it was one of his favorite cities in the world. The band mostly performed tracks from their latest album Sunnyland, but graced the crowd with a few old favorites from Monsters in the Closet, Anywhere but Here, and A Lesson in Romantics. The band also did an acoustic mashup of popular emo songs like New Found Glory’s “My Friends Over you” and the My Chemical Romance hit “I’m Not Okay.” It’s obvious that Mayday Parade is still one of the most solid and consistent acts in emo music, and the genuine excitement in their stage presence over the years has never wavered. The Welcome to Sunnyland tour is new music and nostalgic emo all wrapped up in one amazing show- and the sound is still as cohesive as ever.

Catch them on the rest of the Welcome to Sunnyland Tour!