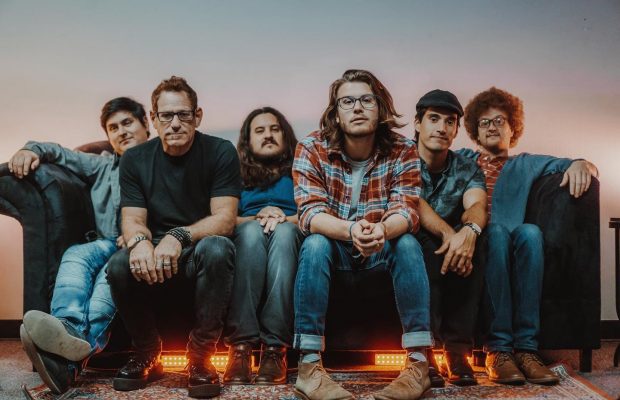 Hailing from Long Beach, CA, Manuel the band creates their own unique mix of Jazz/Americana/Rock music using an unorthodox mix of instruments.  Comprised of Manuel Grajeda (vocals/guitar/bass), Brandon Charles Worth (drums), George Madrid (pedal steel), Richard Fernandez (trombone/percussions), Matt Kalin (saxophone) and Kevin Nowacki (bass), the band has quickly become a staple of the Long Beach music scene with their energetic live shows that continue to gain them an ever-growing fanbase.  Drawing from influences such as John Mayer, Dave Matthews Band and Young The Giant, the band released their first single “Casual Love” in May of last year.  Their energetic live show earned them a spot on last year’s Music Tastes Good festival in Long Beach, allowing them to share the stage with artists such as James Blake, New Order and Joey Bada$$, as well as an appearance at NAMM 2019 and Jam In The Van.   The band recently released their debut album Room For Complication and aim to carve a new niche in the pop music scene.  You can follow Manuel The Band and stay up-to-date with all upcoming music, news and tour dates via the following links.  Check out the video for “Casual Love” below.

The band is made up of musicians who were involved in multiple different projects prior to this. With so many different influences converging together, how did you guys go about developing your sound?  Was it difficult at all in the beginning to blend all of your influences together into a cohesive sound or was it a pretty smooth process?

Manuel– I love this question. To be honest, it was actually a really smooth process. I think the fact that everyone is very eclectic in their styles and tastes made it easy to come together and form the sound that we have, which is this awesome amalgamation of all our influences put together.

The band uses a pretty unorthodox mix of instruments normally not seen in rock music!  What has it been like as a band to combine these instruments with a rock sound?  Do you feel like it has helped you to stand out from other bands?

Manuel– Absolutely!  I think my favorite part is watching people watch us set up. They see the horns and then they see George setting up the pedal steel and the reaction is priceless, almost like a “what is this…?” The sound, when put together, I think forms something incredibly unique and new- not only because of the instrumentation, but the musicians who play those instruments. It’s rock, but with a classy addition of Jazz and Americana blended together, which I think attracts a much more diverse audience. It’s a really beautiful thing to see.

Manuel- As the namesake of the band, as well as band leader, what is the songwriting process for the band?  Do you do a bulk of the songwriting or is it a collaborative effort?

Manuel–  I think that’s a process that’s ever expanding. It started off as me coming in with songs that I had written out completely. As time goes on, however, it’s become a process of I’ll come in with a verse or two and a chorus, see what the band thinks, and then finish up the structure later with a more solid idea of how the band will sound when incorporated. But, like I said, it’s a process that is ever changing and I think always will.

You guys recently released your debut album Room For Complication!  What can you tell me about the process of writing and recording the album?  I read that this is a first step for the band to break out of the Long Beach scene and onto the national stage.  What are your goals going forward to keep that momentum going and make that goal a reality?

George–  This record is like a snapshot of the bands state in it’s first year. Some of the songs are carried over from before the line up was solidified and some of them are full on collaborations between all of us. There’a some really fun energy in this record and there was a lot of growth as a band between when we first started recording some of these parts up until the last song was done, which really was about April 2019. So it’s a little bit of old meets new and we are excited to keep going. We have about 10 songs that get such a great reaction live that have yet to be recorded, so that’s our next step. We need to record and keep connecting with our audience.

What are your different backgrounds in music?  Did you grow up in musical/creative households knowing you wanted to pursue music as a career?

George– Everyone in the band comes from a musical background. We all grew up playing music and various instruments. Matt is straight up rock n roll and fusion jazz. Richard, Kevin and Brandon were in the jazz program at Cal State Dominguez Hills, Manuel grew up playing piano, George plays guitar and bass as well. We all love music and we love the music we play together, so what else can we do? There’s nothing better than playing music with your friends.

The band had the chance to attend NAMM this year!  What was that experience like for you and what were some highlights?

Manuel and George– That was an amazing show and really put us in front of a listening audience, who I think was really shocked by the band- in a good way! I don’t think they’ve ever heard anything like us before. Usually at NAMM it’s like rock acts or neo soul jazz, which is great, but we do things a little bit differently and it’s great to see people enjoy that.

Manuel- I read that you used to shy away from the microphone, with regards to talking to the crowd between songs, but that you and your fellow band members have become comfortable enough on stage to have improvised jam sessions or an extended solo.  How did that level of comfort come about?

Manuel–  Yeah, I still get a bit nervous, but I think that’s cool! Keeps me on my toes. As we’ve played more, though, I think I’ve become much more accustomed to being in front of a crowd. So, I’ll try saying new things, or we’ll try jamming a solo in a different way. For us, it keeps it fresh and something new or every time we play.

You guys have gone through a lot as a band in a short amount of time.  How do you feel that has strengthened the band?  Do you feel that it has helped you to focus more as a whole on goals for the band going forward?

Manuel – One of my favorite things about this band is how we discuss things very openly. We talk about shows, we talk about goals and objectives and how we’d like to go about them as a band. My favorite historic reference, which I’ve totally used before in other interviews (history nerd- guilty), is the Greek Phalanx. That thing moved as one solid unit and depended on the people next to you to move forward and push. I think this band is a phalanx. We work and move together as a unit and that’s what makes us strong and helps us put on a highly energetic show. We depend and trust each other.

What can you tell me about breaking into the Coachella Valley Music Scene and your “desert family”?  What is that scene like compared to Long Beach?

Manuel and George– The desert scene is such a fun scene. Amazing people who have welcomed us with open arms. They really love music out there and they like a show and we want to do both. They just want to rock and jam and that’s us, it’s so much fun and some of the best people. The Long Beach scene is different in many ways. There seems to be a lot more shows here so there’s a lot of people getting into a lot of different types of music. We love jamming and playing 3 hour shows, it really let’s us get into a groove, there aren’t many spots in Long Beach for that.

You did your first mini tour recently!  What were some tour highlights?  What was it like to see Northern California for the first time as a band?

George– Nor Cal was great, we made so many friends and got to see some old friends. Being on the road is such a different animal. There’s 24 hours in a day and maybe you get to do the one thing you are there for, for 90 mins. The rest of the time we get to meet people, hang out as a band and just explore. All our band members really stepped up their game and it was just a blast being together as a band. Quick highlight reel: We got play with a great band The New Crowns, saw a dead body in a river (that puts life in perspective), saw some stars, laid in a hammock, and played our hearts out for everyone.

Manuel–  As of now, we’re still pushing the new album and finishing up the summer shows! It’s been a busy one! At the moment, we’re in discussion if getting back into the studio and hopefully making our way onto bigger stages and festivals for next summer.