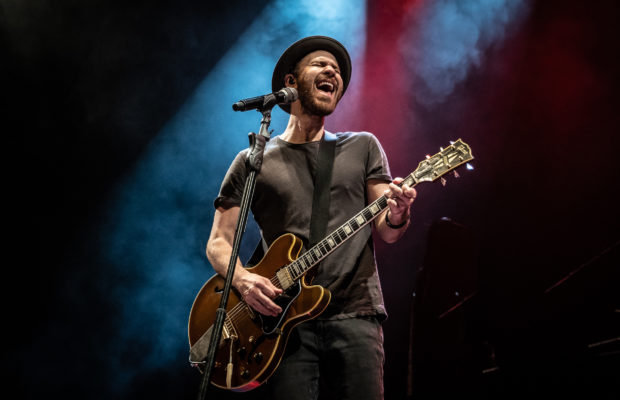 Last weekend I was lucky enough to catch two performances of one of the best live bands out there. Lifehouse! Their last full tour was in 2017 when they traveled the US with Switchfoot on their “Looking For Summer Tour”. Since then, they have only been playing one-offs here and there.

Friday evening the band performed at Sound Waves at the Hard Rock Hotel and Casino in Atlantic City in front of an excited crowd. Die-hard fans traveled from as far as London, UK and Brazil to see their favorite band and Lifehouse did not disappoint.

They opened their set with Wash from their 2002 release Stanley Climbfall and the audience was ecstatic. They continued with a great variety of song from most of their albums, concentrating on fan favorites from the early days, much to my enjoyment.

During Wrecking Ball bassist Bryce Soderberg was on lead vocals and I could overhear concert-goers saying how much they enjoyed listening to him sing.

About halfway through the set, the band gathered at the edge of the stage for a special stripped down performance of Trying and Quasimodo with drummer Ricky Woolstenhulme playing the cajon. Amazing!

Afterward, it was mostly singles and the energy in the room was on fire with fans jumping up and down to hits like First Time, Spin and Hanging By A Moment.

The following night Lifehouse performed in front of an almost sold-out crowd at the Fillmore in Silver Spring. The setlist was very similar to the night before, with the exception of fan favorite Everything added into the stripped-down set instead of The Beginning. What a treat to hear it live again and I think everyone in the venue that night would agree.

Guitarist Steve Stout was especially on fire tonight, putting down some awesome guitar riffs. I love watching him play. After 75 minutes the show ended with Lifehouse’s first hit single Hanging By A Moment off their debut album No Name Face.

No Name Face will turn 20 years old in 2020 and I am hoping there will be a “No Name Face 20th Anniversary Tour” to celebrate one of the best albums ever written and produced. It would be more than amazing to hear the full album live in its entirety along with other hits and rarities from the past 20 years. HINT HINT