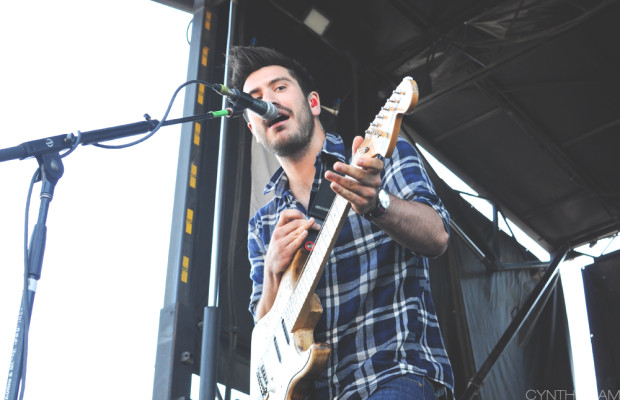 Growing up in the UK, how would you say that the local music scene influenced you when you were growing up and when the band first started?
Yeah, most definitely. When we were growing up we’d go and see bands we’d read about in magazines or see on television and if there was ever a Glasgow band supporting you’d instantly have this connection with them and follow them because you’d have more chances to see them. And then when we first started the band the local scene was all we had really, and you’d end up playing with like-minded bands that inevitably influenced the first few batches of songs that we wrote.

If you could do something differently on the path of Twin Atlantic, what would it be and why?
I think we should definitely have more samba and reggae influenced songs so we could make some solid money as a band on a cruise ship.

Can you pinpoint a crucial part in your musical career that really helped push the band forward?
I think it happened at the very, very start when we decided to practice 4-5 times a week minimum and put the band first before university or our jobs. We had the work ethic then and we haven’t ever really lost that, I think that’s what continues to drive us forward.

You just released a new music video for your song “Free”. What made you decide to work with Howard Greehalgh?
We just liked his treatment the best and he’d made music videos in the past that we were big fans of, like Muse’s ‘Plug In Baby’.

What was the inspiration behind the music video?
It was all Howard’s inspiration really, we were mere puppets at his disposal. He had a really great directional style and got really into every take, he’d be this polite well spoken man between takes and then be shouting at the top of his voice once the camera started rolling.

Is there a concept behind this song? What was it written about?
The song itself is about the feeling that I think everyone has to feel free in their life. Everyone has different things in their life that they can hopefully use as their escape from the doldrums of everyday life and music has always been that way for the 4 of us so it was kind of a way to express that I guess.

How big of a part has the internet been a useful tool in regards to the growth of Twin Atlantic?
At the start of the band it was integral to getting our music out there, when Myspace was still a bustling empire we all used it frequently to get new demos online for people to hear and interact with the first batch of people that started to get interested in the band. Nowadays it’s infinitely quicker for people to find out what you’re doing by using Twitter and Facebook than reading about you’re doing in a a magazine. And cheaper!

What is your favourite social networking site to use to connect with fans?
I myself am not so good at the whole social networking thing, it freaks me out for some reason. Ross is our resident Twitter master though, I think he secretly loves it. He talks for hours about ‘trending’ and ‘hash tags’. Bloody loves it.

If you could play a show with any band or artists who would they be and why?
I would die happily if we ever got to play with Pearl Jam, purely from a selfish point of view as I would probably get to watch them from side of stage – I’m a massive fanboy, I would maybe even throw my pants at them. And if I was side of stage the chances of hitting one of them are much greater.

Lastly, what can we expect from you in 2012?
Lots more touring by the looks of it and hopefully we can squeeze in recording a second album at some point too. Oh, and I’ll be trying to grow to the height of 7 foot over the course of the year. Wish me luck, I’m 25 and have been 5 foot 10 since I was 16 but I think I can do it.