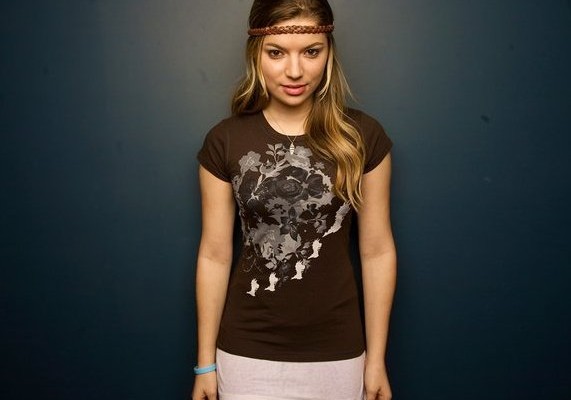 What are your favorite themes to write about?
I really like writing angry, revenge songs. They definitely come the quickest…haha.

When you were younger did you write a lot of songs? What were they about?
I wrote a lot of poetry when I was younger that I would write melodies to. I’d write about the funniest things like fights with my parents or my friends, or having crushes on boys. I was very dramatic.

Not only are you a singer, but you also act. Do you favor music over acting?
I could never choose between the two. Both make me happy in such different ways, I really don’t think I’d ever be able to give either up. Music helps me to face and deal with my problems while acting let’s me escape them.

How would you explain your vocal style?
I definitely have a very pop sounding voice. I grew up doing musical theatre so I over-pronunciate a lot and I try and have as much emotion and feeling in my vocal performance as possible. I think that can make or break a song.

What’s the biggest goal for you right now as far as music goes?
Release an EP and tour… and gain as many fans as possible.

Is there a musical influence that people might find shocking?
I listen to some hardcore and metal. People are pretty shocked when they hear that… like Underoath, Job For a Cowboy, Dr. Acula etc.

What do you think was the best time for pop music?
The 80s’ with it’s Tiffany and Maddonna Pop or the 90s’ with Brittney and boy band? Honestly I LOVE late 90’s/early millennium alternative pop rock. I love Alanis Morissette and Third Eye Blind and No Doubt and I think that was an amazing time for pop music.

What’s your favorite song you’ve written and why?
I don’t think I’ve written that song yet. I’m a perfectionist with myself and I’m never really satisfied with anything I do. If I had to choose though, I’d probably choose Mr. Society, one of the first songs of mine I ever recorded. I just think the title and concept is the most original that I’ve written.

If you could go on tour with any artist/ band in the world who would it be?
Ah! I would love to tour with Katy Perry, she’s definitely somebody I look up to. I’d also really love to tour with Good Charlotte, or maybe Jack’s Mannequin. There are so many bands I’d kill to tour with. Kate Voegele would be a dream. Taylor Swift. Or one of the disney princesses, Demi Lovato, Miley Cyrus, Selena Gomez. They’d be really awesome too.

What came we expect from you in the next couple of months?
A new EP in the spring, some tour dates in the summer… keep an eye out, anything could happen!