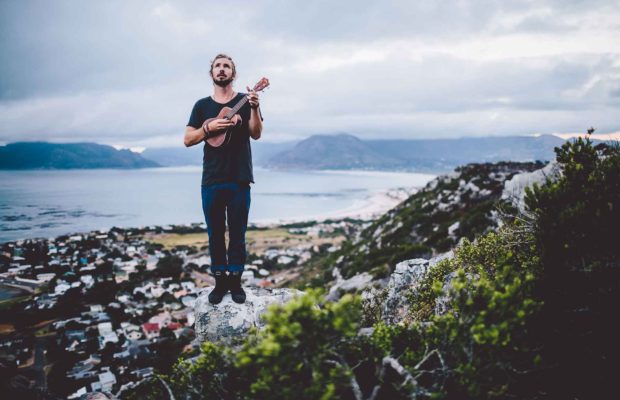 Fresh from a festival filled summer, award winning Cape Town native Jeremy Loops is returning to the UK in support of his debut album, Trading Change. Widely acclaimed for his live shows and varied pool of genre inspirations, we caught up with Jeremy to talk touring, influences and album number two.

How would you describe your music for any Loops virgins?

It’s a mixture of folk, hip hop, gypsy jazz and Balkan all in one. We call it modern folk for shorthand, but really it’s a mix of tons of influences and genres.

You’ve been touring relentlessly for the past year, what can fans expect from your UK shows in October?

All of our shows are high energy, interactive affairs. We don’t sing and play at people, we do it with them. We take that aspect of our shows seriously.

Your social media channels are awash with images of a lifestyle clean enough to turn any health blogger green. What are your top tips for staying well on the road?

Eat well, work out every day, sleep at every opportunity, and get outside whenever you can.

Your Trading Change album was partially written during a period at sea and you are on the road a lot. What influence, if any, do you think traveling has on your music?

Traveling has a big influence in my music in that new places and new people bring about fresh ideas and outlooks on life, and I draw inspiration from my experiences for my music.

The album also documents the moment you became brave enough to follow your passion for music rather than a more traditional path to financial freedom. What advice would you give to either your younger self or others on the edge of following their creative passions rather than more traditional career paths?

I’m not an advocate of giving up a stable professional thing for a creative pursuit in the hopes that it will work out. There are 24 hours in a day. If the average work day is 8 hours, you can spend 8 of the other 16 hours working on your creative pursuits and seeing, honestly, if it’s a viable career path. If it proves so, only then should the courage to take the plunge to do it full time be taken.

Compared to creating music solo with a loop pedal, how is working closely with a band and crew for months at a time? Any particular struggles?

We don’t really have struggles creating music as a collective. I’ve always had a policy of checking egos at the door when creating music. If you have a group of people who just want to make great music, discerning between what’s good and what isn’t really comes down to the music and the music alone. Egos don’t factor. It makes for a nice dynamic.

We know you’ve been up to 3am working on new material – how is it shaping up? Any key differences/changes of direction you’ve already noticed?

Yeah, writing album 2 has been awesome. It’s some ways away still, so I don’t want to talk up its sound too much because who knows what the final product will be, but what I can say is we’re all really excited about the songs we’ve written and it’s been awesome approaching my songwriting from different perspectives.

We will be catching Jeremy Loops’ Brighton show at Concorde2 on October 22nd. Want to join us there? Tickets can be found here.

Photo of Jeremy by Ben Brown