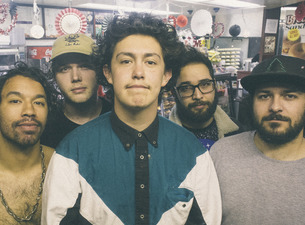 Sacramento, California based rising artist, Hobo Johnson, has premiered the official music video for his song “Father” today. The song comes from Johnson’s critically acclaimed debut album The Rise of Hobo Johnson, which is out now via Warner Bros. Records. The video for “Father” continues what’s becoming a tradition of unpredictable and undeniable visuals for Hobo Johnson. Rapid editing mirrors his topsy-turvy cadence and thought-provoking ad-libs underscored by stirring piano chords. It’s yet another illustration of his dynamic persona and quirky vision.

Next up, he embarks on “The Bring Your Mom Tour” this fall. The headline run starts October 4 at House of Blues in New Orleans, LA and performs in major markets coast-to-coast before closing out the six week jaunt on November 21 at Marathon Music Works in Nashville, TN. Hot off standout appearances at Made In America, Riot Fest, Outside Lands, Bumbershoot, and more, these shows will undoubtedly see the band firing on all cylinders.

You can watch the music video for “Father” below and check out Hobo Johnson’s upcoming tour dates below as well: