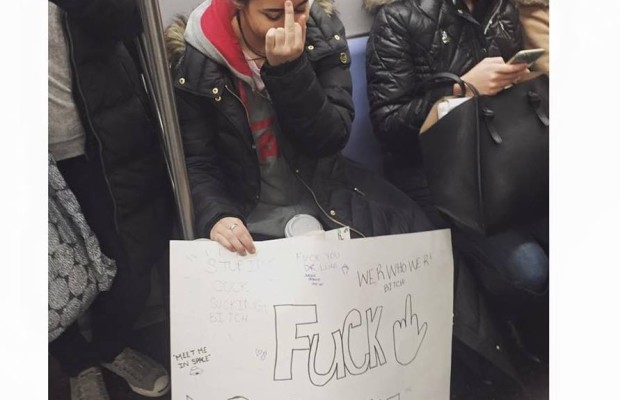 I grew up alongside my cousin, Lindsay Scarpa. For the last ten years, she has continued to be one of the biggest Kesha fans I have ever known. From hunting down exact shade of blue lipstick, to getting pissed off with me because I didn’t dance with her to “Timber” at my brother’s wedding, to being the fan whom Kesha hugged as they sobbed in New York Supreme Court Friday, she has been all for Kesha for all of these years. My cousin Lindsay was always the wild child of all the cousins. The first one with a big “fuck off” to anyone who hurt her sister, my brother, and me. It is no surprise that she would be the one of us to connect with someone larger than life like Kesha. “She means so much to me. She will get justice,” Lindsay tells me. Seeing my cousin on the news everywhere as the face of Kesha fans everywhere has made me so proud because she has such a big heart. She tells Kesha that she doesn’t deserve any of this.

Watching everything that has been happening for Kesha has been difficult and close to home. Not only because someone I love cares so much for Kesha’s career but I too had been abused in what was supposed to be a professional relationship. I was able to leave that situation and I am legally not at liberty to say much because unlike Kesha, my case was settled for what had been done wrong to me. I have continued to work in the same field which is childcare. Although the law had protected me from the mental abuser, to this day I cannot talk to an employer without fear or panic. I still have nightmares on a regular basis where the abuser tells me I am not good enough to do my job and tries to harm the children in my care. The abuse I endured was so minuscule compared Kesha’s story but I remember the months of time where I allowed my abuser to manipulate me into thinking it was my fault, that I would not be able to work in the field I work in because of my mental illness. This is the one time in my life that I had no choice but to be brave and speak up, and so I see Kesha defending herself and feel kindred to her.

Imagine some alternate universe where Kesha Sebert has a very mundane and routine position in a giant corporate office somewhere. Maybe she would show up to work each morning to file boring paperwork or type data into a spreadsheet. In this alternate universe where regular lady in the office Kesha exists, regular lady Kesha is physically and sexual abused. She speaks out and her employer is transferred or better yet terminated. She is compensated for her suffering and provided with adequate psychiatric care to cope with the trauma she has endured. She might not be free from pain but she is not obligated to work at a company who hires rapists.

Regular office lady Kesha hasn’t made a lot of money for the company she has worked for and created new jobs. Why is the little company regular lady Kesha works for safer than a giant corporation like Sony?

These past few years, along with working in childcare, I have been a small part of the local Long Island music industry as a vocalist in a local band. These last few years have made me angry in so many ways and being a woman in music has been one of them. I never understood how it felt to have men treat you like your opinions and knowledge about music and performance do not matter until I was where I am today. I could write tons about how men and women in this field have said very backwards and sexist things to me. It’s been over the course of more than 40 years that any female performer has paved her way into a field where she was not welcome. In the big boys club, where she has to work twice as hard to be taken seriously. Even worse, so many of these women have been in situations somewhat similar to what Kesha is going through.

Early this year, women have come out and spoke out against Heathcliff Berru, formerly of Life or Death PR. Many female musicians banded together to say what they had been scared to say alone. That he had touched them, drugged them, and made them feel unsafe. These women are mostly indie musicians signed to indie labels who, like Kesha were scared of the consequences to their careers if they spoke up. When they did, Berru left his position at Life or Death and apologized for all the pain he has caused.

It would seem that for all of the pain Dr. Luke has caused for Kesha Sebert for the last decade that there is no apology. Just a corporation who doesn’t care about the wellbeing or safety of its artists.

I may not have been Kesha’s number one fan for the last decade like my cousin but honestly her right to safety and expression as an artist means a fuck ton to not only me but the thousands to millions of her fans. As one of thousands of outraged people across the country I am wondering, what do we do for Kesha?

Here are some ideas: