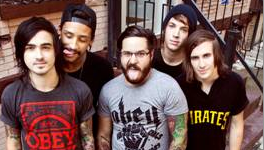 The meaning behind the album title and artwork:

“Our new album will be titled When We Don’t Exist. The title is meant to convey the idea of not “existing” the way that we have before: Not being yourself anymore, not believing what you used to believe, not feeling how you used to feel. We gave the album title to Daniel Wagner of Design By DDub and asked him to portray the dark side of life, showing the troubles that we all face as people & the ghosts that we deal with.” – Chris Roetter [vocals].

Check out their final studio update below.