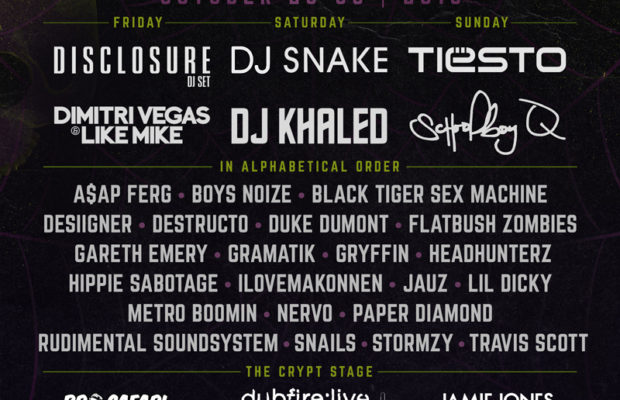 In just a few days, Chicago’s Freaky Deaky Festival will take over Toyota Park and send the sounds of electronica and hip-hop into the stratosphere. Hosted by React Presents, Freaky Deaky brought the biggest rap stars and DJs to Chicago in 2014 and 2015, but this lineup blows it all out of the water. Coming in strong for their third year of Halloween frights and fun, the festival boasts some of the biggest acts of the moment, as well as stellar food, easy access via public transportation and parking, and of course, encourages all festival-goers to dress for the occasion. Here’s a breakdown of each day’s acts and what to expect from this frightfully exciting festival.

For those who want to start their weekend early, Friday boasts some of the biggest hip hop artists of the weekend. Rapper and comedian Lil Dicky and Brooklyn hip-hop group Flatbush Zombies will be starting the day off strong. DJ Gareth Emery and electronic trio Black Tiger Sex Machine will take over The Big Top stage during the day, keeping everyone jumping until dusk. For nonstop dancing, head to The Crypt tent, where renown DJs will be spinning EDM the entire weekend. At night, hip-hop megastar Travi$ Scott will perform his chart-topping hits and get everyone jumping. At the end of the evening, global phenoms Disclosure and Dimitri Vegas/Like MIke will headline The Shrine and The Big Top stages respectively; I guarantee they will light up the entire park.

Saturday promises to bring some of the biggest social media stars to the stage (think Snapchat and Twitter), and everyone will be dressed to the nines to see some of the most exciting electronic groups to be found anywhere in the world. Gryffin and Gramatik, two of the best electronic DJs on the scene, will be spinning at The Big Top stage. In addition, Metro Boomin, who produced Drake and Future’s mixtape, What a Time to be Alive, will be performing his own hits. Metro gained fame by consistently creating solid tracks and reaching out to hip hop artists on Twitter. His EP Savage Mode reached #7 in the hip-hop charts. It will be nearly impossible to choose between Saturday’s headliners; DJ Snake will take over The Shrine stage til 11pm, while DJ Khaled, Snapchat’s hero, will be at The Big Top.

Not to be outdone by Friday and Saturday’s lineup, Sunday will end the festival with such big acts as hip hop artist Desiigner, who had one of the biggest hits of the year with “Panda” (the song has amassed over 370 million YouTube hits). Sunday would be the perfect day to re-energize and appreciate some local Chicago dance music in The Crypt tent with legends Gene Farris and Lee Foss. Although no one will be ready to leave Sunday night, once again festival-goers will have the tough choice of deciding between two brilliant artists. Dutch artist DJ Tiesto is sure to put on a spectacular finale, and rapper Schoolboy Q will no doubt be a show no one will forget.

Can’t make it to the festival, or want to keep partying long into the night? React is hosting a ton of aftershows with nearly every headlining artist! On Friday night, head to PRYSM nightclub to see Dimitri Vegas/Like Mike, or check out Disclosure’s super late DJ set at THE MID. On Saturday night, DJ Khaled will be holding it down at PRYSM, while DJ Snake is going to be keeping everyone up until dawn at THE MID. Last but not least, Tiesto ends Sunday night at PRYSM (be sure to take Monday off to recover from this one!), and Jamie Jones + Lee Foss will be at THE MID, ringing in the start of Halloween. There are still a ton of other aftershows; be sure to head to http://www.clubtix.com/freakydeakyhalloween for details.