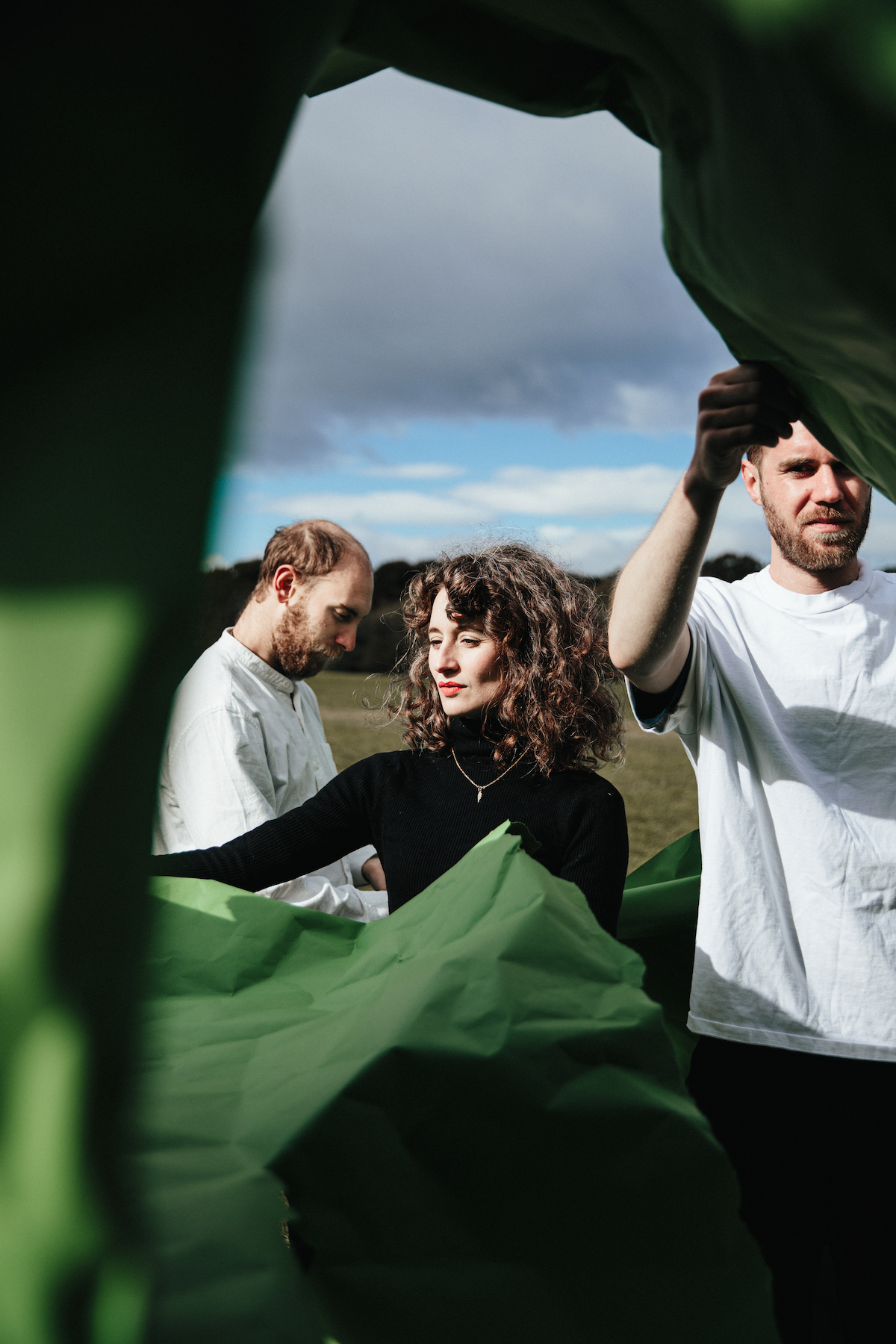 Elder Island today release an eerie new music video for their haunting single “Feral,” the first taste of new music from their upcoming sophomore album.  The striking visual brings to life the uncomfortable dread of childhood nightmares, laced with anxiety and the fear of what awaits when you finally fall asleep.  Reminiscent of a short film, the music video embraces the paranormal and the sinister discomfort of vast, desolate landscapes.  Directed by Jordan Martin who has worked with the likes of Fontaines DC, IDLES, Heavy Lungs, Two Door Cinema Club and Bastille, the video centers around a flickering fireside and the band as cult-esque figures, barefoot and shrouded in the dark.  Filmed on the outskirts of Bristol, it moves between haunted outhouses, vacant grounds and Hitchcock-styled chiaroscuro driving scenes with a permeating sense of dread, visually exploring the burden of childhood nightmares.  Set in the peripheral space between dreams and nostalgia, “Feral” soundtracks waking up in the middle of the night and feeling like you may not be alone.  Raw and unflinching, the track paints a vivid picture as Katy Sargent’s otherworldly vocals interweave with David Havard’s dark, flickering synths and the creeping pulse of Luke Thornton’s twist on the bossa nova beat.

“It was a great opportunity to work with the band on creating a spooky cinematic seance and build our own world around the song and lyrics… We wanted to nod at old horror tropes but put our own spin on it. Incredible fun to make, convertibles, contortions and sleep deprivation! – Jordan Martin, Director

“We wiggled a camera into the moments between waking and sleep. We paid homage to the horror films that broke into our childhood. We got cold feet standing in the dewy grass. It was a pleasure.“ – Elder Island

Elder Island are vocalist and cellist Katy Sargent, bassist and beat maestro Luke Thornton and guitarist and synth master David Havard.  Having served in teenage bands, or in Katy’s case enjoyed childhood cello lessons, the trio met as students in Bristol where subjects studied included fine art, photography and graphic design – all things that would later come in handy for a band wanting to carve out a world of their own.  Deciding to settle in the city seven years ago, a house-share plus a desire to indulge their interest in musical instruments and bits of production kit they had acquired over the years inspired the boundary-free approach that Elder Island’s music has taken.  “Each time we’ve expanded our equipment it has fuelled new music” explains Sargent.  “And it always started in a bedroom or basement rather than a studio.”   The band’s 2014 eponymous EP was the first example of this artistic growth.  An ambient soundscape of field recordings, loops and percussive elements, it was followed by 2016’s more dance-influenced Seeds In Sand EP which in turn opened a path to their debut album The Omnitone Collection, a record streamed over 15 million times within the first year of its 2019 release.  Each project has represented a step forward, as new ideas and sounds have filled Elder Island’s palette, matching the journey-like experience that inspires and underpins each track’s creation.  Having achieved over 200 million streams on Spotify alone for their music so far, the trio’s blurring of boundaries is not limited to just music.  Their approach to how they release and share their music has been uninhibited by traditional industry barriers thanks to the strong connection they have established with a growing, international fanbase.  This has allowed them to possess both commercial and creative control.  A recent example of this unconstrained outlook was witnessed with the release of a tour film in June this year.  Capturing their dates on their Omnitone Tour, the short documentary not only documented the unique, immersive quality of the band’s live performances – which have inspired sell out shows at iconic venues around the globe – but it also heralded a raft of new tour dates for 2021.

Elder Island have headlined 60 international shows to date, performing at large capacity venues across the UK, US and EU, as part of their Omnitone Tour. Venues include The Roundhouse (London), The Marble Factory (Bristol), Bowery Ballroom (NYC), El Rey Theatre (LA) and The Fillmore (San Francisco). In addition, the band were special guest headliners alongside Maribou State at Printworks (London), with support from DJ Seinfeld, Folamour and SG Lewis.  The live experience is also a palpable demonstration of the intuitive, emotional understanding that exists between the trio.  The same understanding that allows them to begin their songs via their improvised, musical journeys, also shines through on stage as the band’s charismatic collaboration radiates as much from their music as from their on-stage interaction.  From their meticulously created records carved out from sonic experiments, which then take on a new existence on stage; via the rich experience inspired by their artwork and videos; to the very philosophy and independence which informs how the trio conduct themselves, Elder Island have evolved the experience of being a band, creating a welcoming, emotive and immersive world fashioned by the sheer power of creativity and free thinking.  It is a place an audience will very much enjoy visiting.  You can connect with Elder Island via the following links: