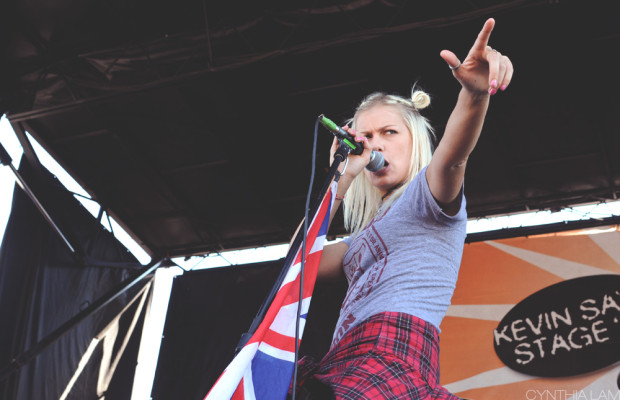 Growing up, how much of a part did music have in your life?
Music has been in every part of my life. Music has got me through some of the tough times and also marks so many good memories as well. I definitely wouldn’t be the person I am today without music.

If you were to turn back time five years ago, would you have ever expected to end up where you are now – being in a touring band and recording in the states?
No way! 5 years ago I was in my bedroom playing guitar pretending I was playing on a stage. This whole experience so far has been so surreal, sometimes I still don’t believe its true.

So you’re working on recording your debut album in Los Angeles. What has this experience been like for you so far?
Actually we recorded in the summer and just released it here. It was such an amazing experience that taught us so much. We definitely learnt how to record an album! We became better musicians and walked away from the whole experience such a better band.

What is your favourite thing about the States so far?
The extremely cheap priced beer.

Are there any food places that you’ll miss when you go back to Australia?
Because a majority of the band is vegetarian and Cameron is vegan we all went to Lotus Vegan a few times and we are going to be stoked to get back there!

You guys will be heading on the Fearless Friends tour in about a week or so. What are you most excited for on this tour?
Playing in all those cities we haven’t played in before. The American music scene is so amazing and the kids are all so great over there, we can’t wait to get back.

Is there any dates on the tour that you are especially excited to play at?
Probably Seattle for me. I’ve always wanted to see that city for some reason and Thrice are playing there the same night so i’m hoping to catch their show after we play!

What can fans expect from your set during this tour?
A lot of energy! We have to try and keep up with the heavy bands on the bill.

Can you describe Tonight Alive in one word? What would it be and why?
Bitchezzzz! This is the word we say to each other before we go on stage and psychs us up for some stupid reason haha.

Is there anything that peeves you off about the music industry these days?
The competition. So many bands are always in competition with each other and it sucks because we should all be doing this together to get the industry off the ground instead of fighting constantly between each other. We definitely just try and stay away from it all and just do our own thing.

What can we expect from you in the future?
A lot more touring and hopefully another record.

If you haven’t checked us out before our hub for everything can be
found on our website.