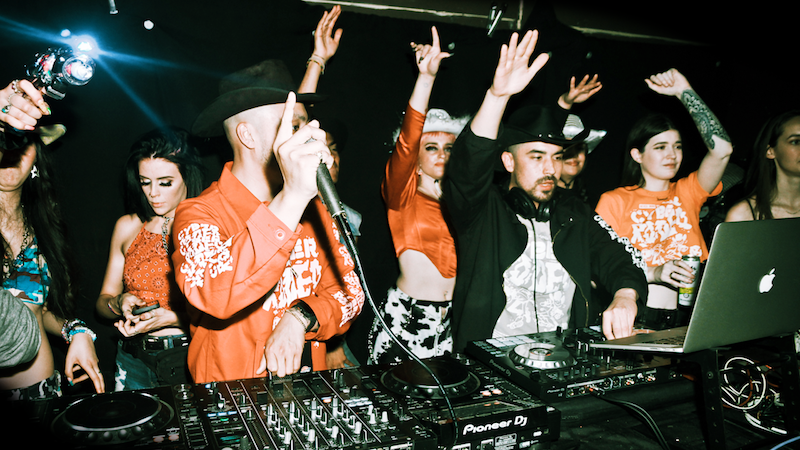 Futuristic techno meets dirty electro on Cyber Rodeo’s new single “Crack That Whip”, released on indie dance/electronic music emblem Popgang Records.  The project was named after and inspired by their weekly party which originally began in the Bay Area.  The event has continued to grow throughout the last few years including its pivot to a virtual version as a Twitch livestream in 2020.  Playful, hard hitting and upbeat, Cyber Rodeo showcases their production prowess through the dexterous and intricately layered track.  Incorporating a wide range of sounds and genres, “Crack That Whip” is best characterized by its robotic vocal sample, driving tech house beat, double-pedal metal, and Justice inspired outro.  A solid listen from start to finish, the four and a half minute track is more fun than a showdown at sundown in Night City.

“We wanted to pay homage to Folsom Street and the Folsom Street Fair (which is where our monthly party was in SF). A lot of our party goers would dress up in a combo of bondage and cowboy attire, and we wanted to make a song inspired by those two themes and that’s how this kinky leather clad anthem came together.” -Cyber Rodeo

Started as the idea for a random party theme in 2019, Cyber Rodeo quickly became the best underground tech-house party in San Francisco.  Featuring a wild cast of glitched out futuristic cowboys and cowgirls, the party wildly embraced all things tastefully tacky.  Cyber Cowboy merchandise has since been worn by Lil Texas and heavily promoted by influencers worldwide.  The merchandise collection was also commissioned by Dolls Kill where it completely sold out.  The organizers (Baby J, TYGRBYT, and Fran Margelia) quickly began producing music under the moniker and have since performed Cyber Rodeo DJ sets with the likes of Dillon Francis, Chris Lake, Fisher and Travis Barker.  In 2020, they launched a  livestream version of the party on the Popgang Records’ Twitch channel.  Cyber Rodeo will continue to produce livestreams and release songs along with merchandise throughout 2021 and beyond.  You can connect with Cyber Rodeo via: Instagram | Spotify | SoundCloud.  You can connect with Popgang Records via: Website | SoundCloud | Facebook | Twitter | YouTube.