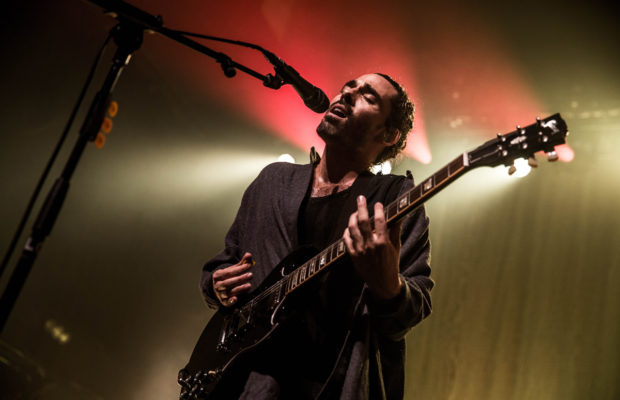 Manhattanites huddled closely in groups to share warmth as they lined up outside of Terminal 5 Wednesday night. On a day that was perhaps the coldest day of the season thus far, California-based indie rockers Local Natives were bringing their sunshine-infused, warm music to the stage.

Toronto-based R&B singer Charlotte Day Wilson kicked the show off by warming up the crowd with the soulful lyricism from her debut release CDW. Bathed in red light, Wilson belted her powerful voice into the microphone before adorning a sleek black bass for the following song. With the notable, Terminal 5 disco ball shining its effervescent sparkles across the venue, the crowd was captivated. Halfway through her lengthy opening set, Wilson paused to thank Local Natives and crew for bringing her along on their massive US tour; her first ever tour. “Tonight is a special night,” Wilson shared “because it’s the last night of our tour with Local Natives…. We’re gonna go out after this and party and get shit faced!”

After a speedy set change, the lights dimmed and the faded outlines of Local Natives graced the stage. Among the screams of young girls, hoots and hollers from the second and third balconies, lead singer Taylor Rice slid his guitar on and began to play the opening of “Past Lives”. I was able to watch both the band and the crowd from my perch on the side stage and saw the unwavering smiles of the crowd as they looked up, watching Local Natives play so effortlessly. The band brushed off slight technical difficulties before beginning “Villany”. Their setlist was packed to the brim with a diverse range of songs both new and old and they showed a mature and sophisticated reading of the crowd in the way that they let the set simmer down only to pick it right back up again.

Local Natives surely threw a party on the final night of their tour, covering David Bowie’s “Let’s Dance”, in which Charlotte Day Wilson returned to the stage to serenade the crowd with her saxophone skills. Local Natives 19 song setlist was beginning to wind down when they introduced Westworld actress Evan Rachel Wood to sing vocals on “Dark Days”, a personal favorite from Sunlit Youth. The band concluded their killer set with their hit single “Sun Hands” and for just one night, us Manhattanites were taken on a warm, palm tree infused journey through Southern California. Local Natives have improved and matured greatly since their origination in 2005, and after watching their performance last night, it is clear that they know how to throw a party and are showing no signs of stopping any time soon.