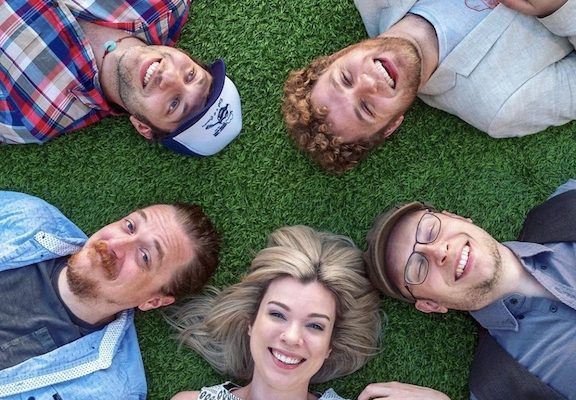 CC&TheBoys are a true Backwoods in the Big City band. Based in NYC, CC (Christine Cherry), born and raised in Montgomery Alabama, formed the band in 2016 with the original release of her album Worth A Shot. With that release and the addition of Amos Rose, Eli Bridges and Jon Wert (and later Bo Grady) the band was put in motion. Over the last 3 years, CC&TheBoys have become a regular staple in the ever growing country scene in NYC.  Featured as a house band with the opening of “Opry City Stage” (Grand Ole Opry) in Times Square and other notable venues such as the famous Honky Tonk “Skinny Dennis” and Blake Shelton’s venue “Ole Red” in Nashville and Gatlinburg, CC&TheBoys can be seen regularly “keeping it country” all over the country!  Check out their videos for Christine Cherry & The Boys @ Skinny Dennis, the original song “South of Shady” and CC&TheBoys quick bits.
The release of their new single “Tied up In you” starts the beginning of a string of releases coming from the band this year. Inspired by true classic storytellers, CC has a talent for giving you words that ring true and stay with you long after the song it through.  For true country lovers, this is a band all about giving you genre-bending styles and sounds that will always make for a memorable night!  Featured in the NY Times with the opening of Opry City Stage, other reviews such as Medium.com said CC “… is into it from start to finish, and her expressive performing style drags you in immediately…. Old school with a new twist.”  Credits: Photos/Video shooting: Pete O’Hare and Editing: Thomas Lowery.  You can follow CC&TheBoys and stay up-to-date with all upcoming news, music and tour dates via the following links:
Website | Facebook | Instagram | Twitter | Spotify | YouTube | iTunes/Apple Music | SoundCloud |