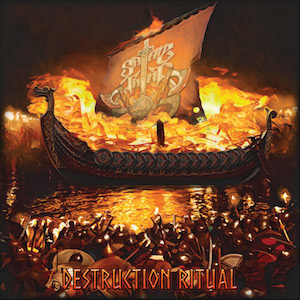 American guitarist Bobby Gustafson, best known as a member of thrash metal band Overkill until his departure in 1990, went on to play guitar for several other bands before taking a short retirement from music.  In 2003, he returned to music as part of the Florida-based band Response Negative.  He has been performing with his solo thrash project Satan’s Taint since 2014 and released his latest album entitled Destruction Ritual on August 2nd, the band’s first new material since 2017.   You can check out the track “Desecration” from the album below.

In addition to Gustafson’s signature sound and razor-sharp riffs, Destruction Ritual features various friends and musicians with whom Gustafson has worked and whose work he has admired.  The new release includes contributions from long-time drummer Jim McCourt and singers Dan Ortega and Paolo Velazquez.  The album was recorded at Powerstation Studios with Gustafson taking on all guitar and bass duties for the album. “This is the hardest I’ve ever worked on an album. 12 songs – guitar, bass and lyrics. Musically, I stuck to my roots, but had an open mind. The music matters above all else,” explained Gustafson.  And of the criticisms of the band name, Gustafson takes them in stride “All I know is, if a band came out today with the name PINK FLOYD and I based my interest on their name, I probably wouldn’t give them a listen.  And how wrong I would be!”  Themes of religion, war, Nordic culture, history and revenge combined with roughly hewn Thrash Metal provide the solid foundation upon which Bobby Gustafson built his newest Satan’s Taint album, Destruction Ritual.  You can follow Satan’s Taint and stay up-to-date with all upcoming news via the following links: