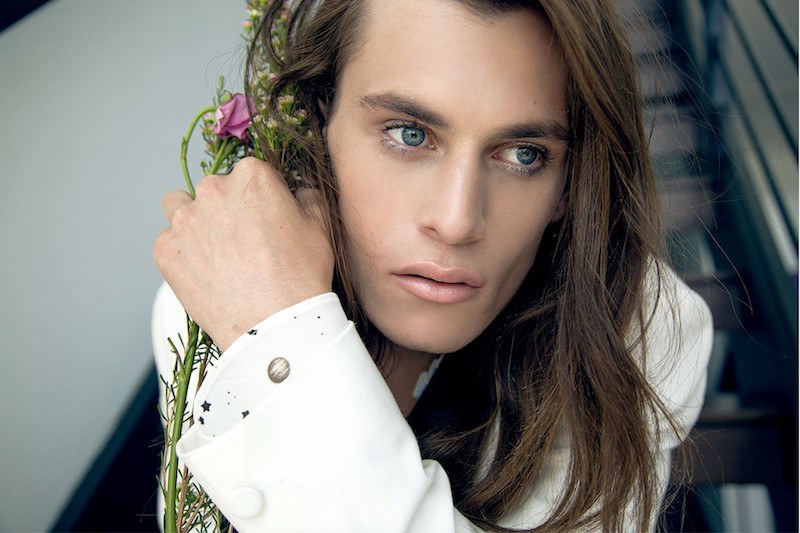 Today the family of the late Harry Hains has released ANTIBOY’s full length debut album A Glitch In Paradise, out now via ANTIBOY Records.  A Glitch In Paradise, released in honor of what would have been Harry’s 28th birthday, features new single “Dream.”  The brand new video for “Dream” stars transgender model and activist Andreja Pejić, is directed by Charlie Chops (Rihanna – Savage x Fenty, Kim Petras, Marina and The Diamonds) and features animation from 3D artist and designer (and Harry’s brother) Sam Hains.  The video is the next installment in the ANTIBOY universe that continues to illustrate Harry’s prolific vision of a future where we live without societal constructs and labels.  On A Glitch In Paradise, which has received praise from Billboard, Pitchfork, NME, People, Nowness and more, ANTIBOY – Harry’s artist name and the representation of a genderless transhuman – envisions an age of existence where there is complete unparalleled freedom to live without preconceptions.  ANTIBOY re-lives his mistakes in order to try to correct them and find happiness, but experiencing glitches that trap him in an endless loop of heartache – inspired by Harry’s relationship with then partner Mike.  The new single “Dream” explores the idea of how a partner not being able to accept pure love can foster pain and rejection within the relationship – the next glitch in “paradise.”  The “Dream” video opens up a fantastical utopia of fragmented moments that blend the everyday with the surreal, just like dreams, as a cast of characters explore unattainable love, touch, closeness, relationships, and euphoria, led by Andreja who progresses from unsettlingly perfect and robotic to completely unhinged.

“So many of us spend our lives trying to connect on a profound level, especially when we are unique and different and the sense of isolation permeates our childhood, and Harry did just that.  “Dream” is a celebration of differences with a wide-array of performers from all shades of the LGBT community and stars one of the first trans models to burst out onto the scene like a beacon shining a light on others to follow…this is Harry’s tribe.  The “Dream” video is like a David LaChapelle photo on steroids, led by the outrageously talented director/photographer Charlie Chops, and it was incredible to see her collaborate with 3D artist Sam Hains, Harry’s brother and my son.  It’s is all so bittersweet that I am now channeling Harry through this work and creating art that helps bring his magnificent vision to life,” shares Jane Badler, actress, producer and champion of the ANTIBOY project.  “I love Harry, and his story and vision for having less labels and less barriers between us really touched me.  The “Dream” video is such a lovely project to be involved in – very young and creative, and I loved the idea of playing a robot.  My character is a trapped soul dreaming of freedom but later she transforms into a grungy glitter-faced rock star who doesn’t care and lets it all go.  I had so much fun on the set.  I am so proud of everyone in the video.  These kids are new and special and just went all the way.  And Charlie was such a pleasure to work with!  I loved being able to spread my wings on set in Los Angeles after focusing on so many projects internationally and in New York,” shares Andreja Pejić.  “Harry’s inclusive message is what drew me to get involved.  It was clear he was so concerned about not leaving people out and making people who are sometimes the outcast the main attraction.  For the “Dream” video, I wanted to show the endless possibilities that there are when bringing such a diverse group of people together.  I think to be queer is something that has been redefined in the past decade and we are in a time for new art,” says Charlie Chops.

A multi-dimensional and genderfluid visionary artist and actor (most noted for American Horror Story and The OA), Harry created a merger of human consciousness with artificial intelligence through ANTIBOY, representing a non-binary existence negating gender and labels, creating a space to live freely and authentically.  Harry’s inclusive perspective and forward-thinking vision is needed now more than ever at a time when society is reckoning with systemic injustice and inequality, encouraging ongoing conversations about sexuality, gender, race, and self-expression.  Harry’s vision of a virtual utopia where there is no inequality, prejudice, or toxicity has been brought to life by Harry’s brother Sam Hains, a 3D artist, animator and designer that has created a visually stunning animated universe for his sibling’s poignant vision for the future of our world. Sam, who recently graduated from NYU Tisch’s media and technology arts Master’s program (ITP), designed an immersive Off-Broadway show called #DateMe last year and has performed experimental video works at La Mama’s CultureHub and ISSUE project room.  His artwork has also been featured in publications such as Vice’s Creators Project, Public Records TV, Neural Magazine and The Wrong Biannale.  “I am inspired by Charlie Chops’ work and her distinctive style of colorful futurism fits super well with Harry and the ANTIBOY project.  It was exciting that she wanted to direct this video.  I hadn’t done VFX for live action film before, so I was also excited by the challenge of incorporating what we had been doing with the worldbuilding and graphics for ANTIBOY into recorded footage with performers.  I worked with two collaborators (Base Mode and Simon Villaret) to elevate the futuristic, cyberpunk, fantasy vibes of the ANTIBOY world through CGI and visual effects.  Each performer in the video is a cyborg who exists in multiple worlds at once.  There is this colourful, post-category dream world that Charlie has created, and then there are multiple other digital and simulated worlds that the actors exist in simultaneously.  This layering of augmented and hyper realities is something that is already very familiar to us as humans in a digital world.  We are already cyborgs.  Each scene has as a “glitch” – a momentary vision of these other virtual realities.  Some of them are more sinister, whereas others are more blissful and fun.  There’s an ambiguity about the nature of reality in the film – are they fantasies? are they simulations? What is real?” says Sam Hains.

The video for ANITBOY’s previous single “Paradise”  which Sam also directed, is a metaphor for toxic relationships and drug dependency.  Harry personally struggled with both and lost his battle with drug addiction this past January.  Like an arcade game, you have to put more and more coins in to continue, and the deeper you get the more stuck you are.  You can experience “paradise,” but at a mounting cost. Club Quarantine celebrated the release of “Paradise” with ANTIBOY ‘s “Welcome To Paradise” Rave, a virtual celebration and safe space for queer creatives to authentically be themselves, featuring Markus Molinari, Brendan Jordan, Gigi Gorgeous, and more.  “Good Enough” features the souls of two beings – equally human and bionic – longing for connection, acceptance, and love, while Harry’s cover of the classic Nancy Sinatra song “Bang Bang” features glitchy computer game-style production.  Harry’s identity was gender fluid, shapeshifting and open to interpretation just like his music, an amalgamation of rock, electronica and gothic pop that cannot be distilled into one type of genre or emotional palette.  Harry’s mother Jane Badler is the driving force behind ensuring that Harry’s wish for our society is shared with the world, and that his death is not in vain.  Through releasing Harry’s music and art in the wake of their unthinkable loss, Jane and the Hains family are offering a hopeful message and an inclusive community for anyone struggling with battling demons of their own or just feeling like they don’t fit in anywhere.  Growing up in Melbourne, Australia, Harry’s uniquely imaginative mind blossomed as a child.  He created horror films on his camcorder and wrote short stories and countless poems inspired by Sylvia Plath and EE Cummings.  His path eventually led him to London for modeling and then to LA to pursue his passions for acting and music.  He lived, ate and breathed music, film and art creation.  For Harry, art should not be constrained to what it has been previously, just as human existence should be free to evolve.  His songs are Trojan Horses packed with such revolutionary ideals.  Although Harry isn’t here to speak for his creations, they speak for him, offering up the view he had for a limitless and more modernized world.  You can connect with ANTIBOY via the following links.  Photo credit: Ella Weisskamp.