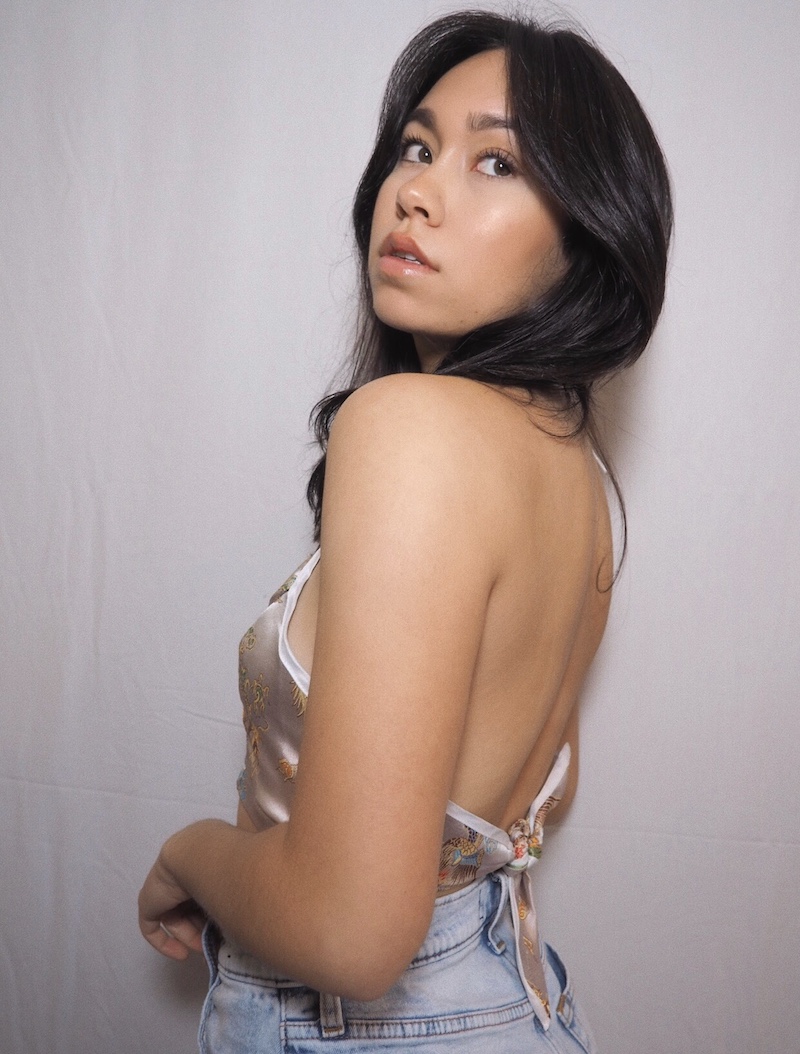 Vancouver singer-songwriter Andrea Clute loved music from an early age and used music and performance as an outlet growing up.  She joined musical theater in school and always found support from her family, who encouraged her to sing, whether in school competitions or family gatherings. Her brother Chris Clute is also a musician, with the two often collaborating playing off of each other’s strengths.  Having that encouragement and inspiration has been invaluable.  Through the process of trial and error, she has honed her songwriting and vocal skills and has experimented with atmospheric sounds and cinematic elements in her music.  After tagging along with her brother one day to the studio of the production duo Sounds of Kalima, she got along really well with them and started working with them to produce her music, as well.  Most recently, she released her single “Red Light”, a song in which she explored the realm of alt-R&B.  “”Red Light” sets a romantic vibe with its lyrical imagery, says Clute.  “”Red light” is the confidence and vulnerability of showing the person you love your true colours and true self.  There is nothing more intimate than giving everything that you are to somebody you love.” With plans to release more singles, Andrea Clute is just enjoying the journey of exploring her sound as an artist and discovering things about herself in the process.  You can connect with Andrea Clute via the following links:

Having grown up in the late ’00s, what can you tell me about using music and performance as an outlet growing up?

Having grown up in the High School Musical era it definitely inspired me to join musical theatre and peaked my interest in singing.  My parents had always been super supportive of my music and growing up would encourage me to enter my elementary school singing competitions and sing karaoke at family gatherings lol.  Another outlet for me was singing covers and posting them on the internet.  When I discovered Justin Bieber on YouTube I was obsessed with the YouTube music world.  I love that there are even more ways for people to hear your music now like on TikTok, etc and I’ve found it’s a lot more enjoyable to post a few second clips rather than long videos.

You have said that music is the only thing you ever want to do.  What can you tell me about your journey into music and growing your songwriting and vocal skills through trial and error?

I think my music journey is never ending.  I’m constantly discovering new things about myself and figuring out what I like and dislike.  That’s what makes creating music so exciting to me.  I’ll never create the same song twice.  I’m always searching for new melodies and new ways to tell a story.  The more you do it the better you get.  It was pretty hard at the beginning writing my own music but with practice it definitely has become easier.

You have mentioned having moments where you don’t know if you can do this, with it being an unstable path.  What do you do to keep yourself driven and motivated when those doubts creep in?

Surrounding myself with positive and like minded people has definitely helped me to keep believing in myself.  My friends and family are so encouraging and want what is best for me.  However at the end of the day it has to come from me and how badly I want this.  It also comforts me to know that there is no one exactly like me in the world so it gives me hope that maybe I’m what someone is looking for.  If I were to give up on music I would be soooooo sad and empty.  Music truly gives me joy, so that in itself motivates me to keep going.

In gaining more confidence with each release and with more time spent at home over the past year, what has it been like for you to become more involved in the production process?  What do you enjoy about learning to produce your music?

Honestly, I don’t actually produce the music.  I do tell my producers (SoK) what I like and don’t like. However, I do like for each of us to set their own vibe on the track and really make it a collaborative effort.  I think everyone needs space to create magic and that’s what I like to do.

Your brother Chris is a musician, as well.  What has it been like for you to share such a supportive relationship and collaborate together on music?  Having different styles, how do you feel you complement each other?  Do you ever butt heads on things when collaborating?

I’m so grateful for the relationship I have with my brother.  He’s so encouraging, helpful and filled with incredible ideas.  I learn so much from him and it inspires me to see how much effort he puts in.  To be honest, we work really well together.  I think it’s because we’re so close we’re not afraid of being honest and upfront about things.  We both have different strengths so it’s always nice collaborating with him.

What can you tell me about your new single “Red Light” and writing a song that differs from your past work? What led you to want to explore the realm of alt-R&B?

The night we wrote “Red Light” we were listening to some songs by Alina Baraz and automatically I was obsessed and inspired.  And I knew I wanted to write a love song so we just decided to create a cinematic yet angelic piece.  It’s very different from my previous songs but that’s what I love about creating.  I hope to keep creating songs that sound different from each other.

What led you to incorporate a dual meaning into the lyrics of “Red Light”, using physical descriptions to convey emotional feelings and thought processes?

The sound of the instrumental with it’s openness and trance-like qualities led me to write from a meditative place.  In meditation you join your emotional state of being along with your physical state of being.

How did you meet and come to work with Sound of Kalima? How do you feel they came to demystify music production for you?

My brother was working on a song with SoK and he thought he’d just bring me along one day.  I wasn’t really working on music at that time, but they’re good friends, so it seemed like a chill place to hang about.  But then they asked me to sing some stuff and it felt good to do it – I had experience singing in the past but not really recording/creating music.  It felt good, they liked my voice and then we just started working from there.  Production still confuses the hell out of me but I play the guitar so there’s that.

As an artist who enjoys playing with genres, what kinds of sounds are you hoping to experiment with going forward? Do you have any fun collaborations in the works?

Recently, I listened to Madison Beer’s new album Life Support.  I was inspired by her experimentation while keeping things accessible and catchy and it was just a great combination of sounds.  I understand that we’re quite adventurous as well with my music but maybe approaching something harder/darker.  I’d love to put an accordion in my song!  I have a few collabs with local artists that are ready to come out and I’m always ready to challenge myself with more collaborations.

I have so many songs with SoK just waiting to be released.  So what’s next for me is a new single in the near future called “Warn Me” and there’s quite a few more to follow.  I’m just really on a vibe right now.  I’m excited by the unknown and just figuring myself out through the music so expect more of ANDREA CLUTE in the music.