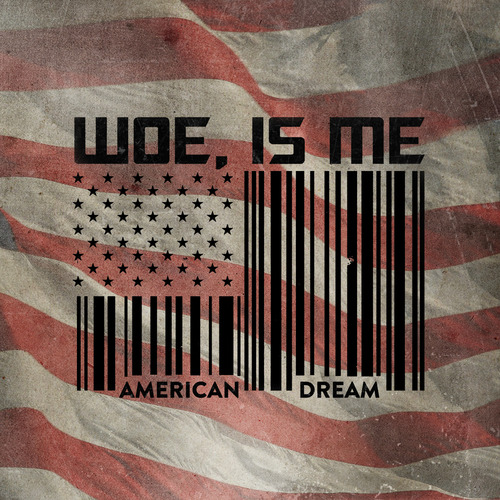 Since Hance Alligood joined metalcore band, Woe, Is Me in late 2011 in place of clean vocalist, Tyler Carter, there has been an ongoing feud between WIM and Carter’s new band, Issues. However, it hasn’t stopped the boys in WIM from touring around the world, and stopping off at the studio to record new tracks for an upcoming full-length album. The metalcore band from Atlanta, Georgia, has release one full-length album, and one EP since the departure of original members, Michael Bohn, Tyler Carter, Cory and Ben Ferris, and Tim Sherrill.

American Dream was released on August 20th through iTunes and Best Buy. Within its five tracks, the EP isn’t much to praise, as each song sounds like something we’ve heard before from them. However, after loosing all but one original member, the boys in WIM have picked up the pieces, and pushed themselves to work on their music. The five tracks sound much the same to 2012’s Genesi[s] with the overworked riffs, breakdowns, and generic lyrics. However, there has been evident improvement in Alligood’s clean vocals, which are showcased in the two pop-driven acoustic songs “Restless Nights” and “Fine Without You.” The EP opens with “Stand Up,” which has the traditional breakdowns, and electronic influences we’re used to. The song was debuted on June 15th during the first stop on the Vans Warped Tour. The second single “American Dream,” was released on August 17th. The song veers away from the bands integration of electronic sound, and sticks to the heavy guitar riffs, and chorusing “oh’s.” The third track, “A Voice of Hope” is the heaviest song on the album and showcases the unclean vocals from Doriano Maglinao. As the EP progresses to the two acoustic songs, seem out of place, as they are paired up to three songs that are heavily ridden with drums, unclean vocals, and fast paced guitar riffs. Nevertheless, both “Restless Nights” and “Fine Without You” show a pop-driven side to Woe, Is Me and give listeners a break from the repetitive tracks.

With the release of American Dream, the six boys in Woe, Is Me, have shown hints of improvement and diversity; however, not enough to pull their sound away from the electronic/metalcore we are used to. With another full-length in the works, the fans of WIM have much to look forward to.