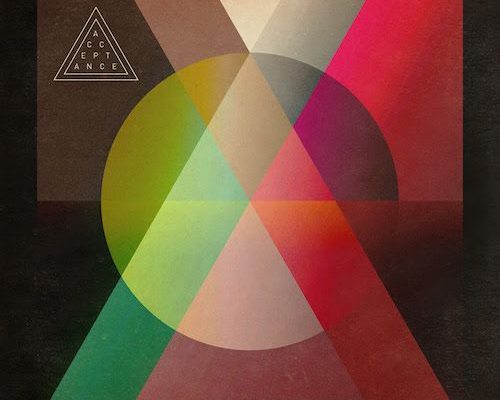 Seattle based pop-rock band Acceptance have been around for quite some time, but chances are most young fans have never even heard of them. Storming onto the scene in 1998, the band released two EP’s and their debut album in 2005. However, Acceptance began to slip away from the scene as their lack of music was being overshadowed by some of the powerhouse bands that were coming onto the scene. Thankfully, Acceptance never let themselves slip fully away, as they released their long (literally long. 12 years we waited) anticipated sophomore release Colliding By Design.

The record has a revamped sound that proves Acceptance is in fact alive and well in 2017. The opening track “Diagram of a Simple Man” is an invigorating track that assures fans who have been waiting years, that the wait was well worth it. “Come Closer” is an impeccable culmination of drums, guitar and synthesizer that create a head bobbing ear worm track.

As the album progresses, things only become better for the listener. While each song has it’s own attitude and sound, the album as a whole is the perfect introduction to spring with it’s poppy inspirations. “Fire and Rain” hits the ground running from the literal first second of the song, with guitar and drums pouring into the listener’s ear.

The record concludes with “Golden” with the voice of lead singer Jason Vena sinking in “We’re all just chemicals/ We’re all just chemicals/ You can lose yourself in me/ And I feel it when you breathe”. “Golden” is a personal favorite on the album and the perfect concluding track for the record. The upbeat sound and consistent pop beat will surely keep listeners dancing to it all day.

While Acceptance may have had their ups and down in the decade plus break that fans endured between albums, the band have surely proven that they are still here and they have so much more to show fans. Despite being away from the scene for so long, Acceptance have created a masterful record that pulls inspiration from some of the pop-rock bands that have cited Acceptance as their own inspirations. Acceptance definitely gained a new fan here and it will be very exciting to see what the future holds for these guys!