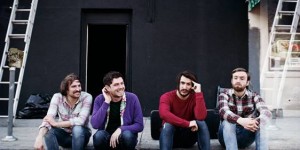 Twin Atlantic has released a new music video for their song “Free” which was directed by Howard Greehalgh. They are currently also on tour with their Red Bull Records label mates AWOLNATION on the Fall Harvest Tour. This tour will run until the end of November and then Twin Atlantic will be heading out on The Free-ze Tour”.