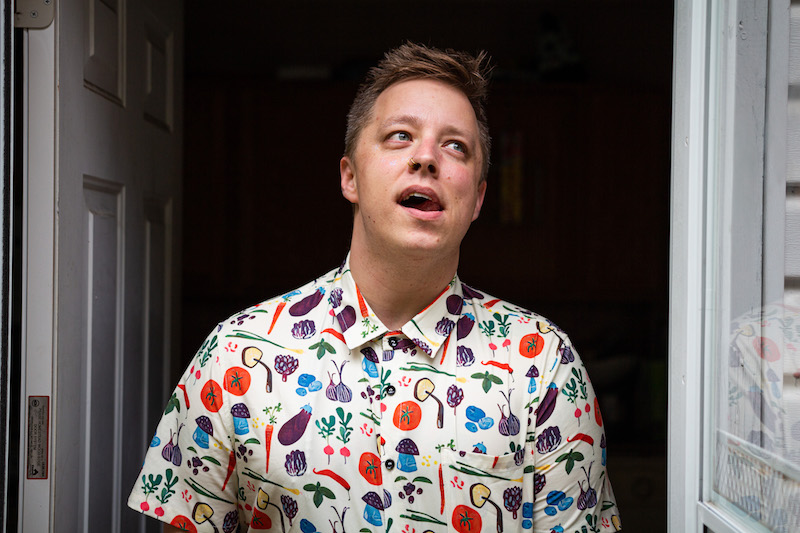 The concept of a multiverse is one that has recently exploded into the zeitgeist, but this is where fans of indie-punk stalwarts You, Me, and Everyone We Know have felt the most at home since the band’s inception. Each new incarnation of this project has featured a cavalcade of incredible musicians that have helped flesh out entirely new pocket dimensions of sound for figurehead Benjamin Liebsch (pronouns: He/Him or They/Them; Ben is non-binary) to call home — even if only temporarily. However, if comic books have taught us anything, it’s that these realities are all bound to fold into one another eventually, forcing a new perspective in a way that is just as uncomfortable as it is necessary for continued growth. This is the reality of the band’s long-awaited sophomore album — the blithely vitriolic and aptly named, Something Heavy, slotted for release on September 17, 2021 via Know Hope Records.  On the heels of their latest single “draggedacrossconcrete,” You, Me, and Everyone We Know is offering another sweat-soaked-house-show filled window into the upcoming album with the music video for title-track “Something Heavy” out today.

“The song is about carrying on, I suppose,” explains Liebsch. “Finding that even after mystical experiences and trauma therapy, there is still living to do. Figuring out your ‘something heavy,’ and putting down what you can when you can, is life.”

A lot has changed in the six years since we last heard from You, Me, and Everyone We Know, primarily with Ben’s journey with their own mental health. Through therapy, they began to learn how to unpack traumas that informed a lot of the perspective of past material and understand the impact those traumas had on their development as a person. The process of knocking down these walls that Ben forgot they even built informed a good chunk of songwriting for Something Heavy, which references the ideological teachings of Ram Dass and the philosophical musings of comedian Pete Holmes, in such a way that allowed all of the separate world’s that they’ve inhibited to bleed into one another.  Liebsch recalls, “The trauma I suffered throughout my younger years led me to make up stories about times where I stood up for myself in the hopes this would prevent being bullied or abused. Alas, it did not… I was bullied and abused throughout the first twenty five years of my life. In reality, I do care deeply about all of this unnecessary suffering in the world and my experience with the industry has been deeply frustrating. It’s like I got to the door of the party and I keep being told I’m not good enough for whatever reason, meanwhile I can hear my record being played inside. These exhausted frustrations with others and self are juxtaposed with a celebration of radical spiritual awakening and self acceptance.”

The result of this is a sound that Liebsch has dubbed soul punk, which connects the ten songs that make up this record by a frenetic energy that allows for the cathartic wails of songs like “I Don’t Care Anymore, I’m Enough Now” to feel at home in the midst of something as explorative as a full-band version of the previously released “Ram Dass Dick Pics,” and contemplative proclamations like “(Still) Basically a God” to sit next to driving anthems like “F.I.N.E.” without so much as an eyebrow raise. These changes come to you at break-neck speeds, much like the emotional stages of learning how to cope with the harsh realities that have shaped all of us, but that’s what makes this record feel as important as it does.  Ben has said that You, Me, and Everyone We Know is what has kept them alive through all of the peaks and valleys of human existence. “Music never crossed my mind as a pursuit,” reveals Ben. “Nothing did. When I first started writing the songs that would be the unintended inception of this band, I thought I would be dead by now. I had no intention of doing any of this. Yet here I am 15 years later, having since found deep meaning, purpose, and fulfillment in someone else’s dream.” This project has allowed them to explore facets of their own reality in a way that might have otherwise been unavailable to them, and with Something Heavy, Liebsch uses the perspective he’s gained in the decade since the release of Some Things Don’t Wash Out to fold each of the band’s many realities into each other — and the end result rings bloody and triumphant.  You can connect with You, Me, and Everyone We Know via the following links.  Photo credit: Connor Feimster.