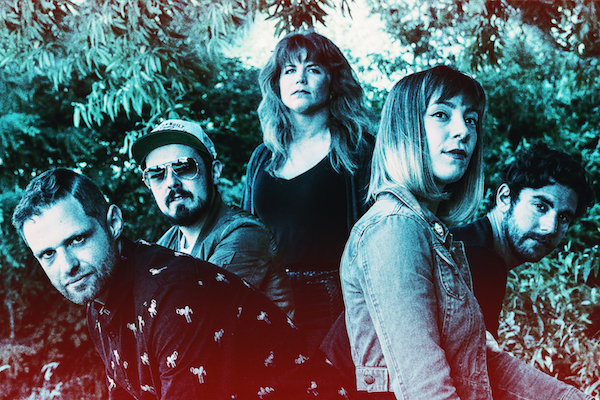 TREASVRE is a band of five San Francisco Bay Area natives that blends elements of post-rock and shoegaze with rich synth textures, heavy guitar riffs, and electronic rhythms. Vocalists Samantha Peña and Sabrina Simonton create wistful harmonies that underscore the themes of nostalgia, melancholy, and hopefulness found in their lyrics. The drama and depth conveyed by the music creates a distinctly cinematic quality —one that captures the complex range of human emotion in beautiful and inspiring ways and begs to be experienced live. The band released the first of four new releases last year,Devils / Echoes EP,which wrestled with heavy themes that are especially pertinent during these times of social isolation. With three subsequent EP’s since released, this year saw TREASVRE release their new double single “Heavy Arms / Secrets,” the final chapter in a four-part series.

TREASVRE has returned with the music video for their captivating song “Devils”. Inspired by the psychedelic imagery of the 1970s, the music video showcases the power that lies in uniting visual and audio mediums, bringing the immersive, cinematic quality of the band’s sound to life on screen. Together, futuristic elements, dramatic lighting, and trippy camera angles reflect the song’s shoegazy, post-rock vibe while presenting the compelling story of a lone motorcyclist on a quest to confront her inner demons. Known for their ability to capture a complex range of emotions in beautiful and inspiring ways, TREASVRE never fails in speaking to the resilience of the human spirit. Overarching feelings of nostalgia, melancholy, and hopefulness are often found in their lyrics, while driving guitars, saturated synths, and groovy rhythms create a mood and energy that is hard to overlook. You can connect with TREASVRE via the links below. Cover photo credit: Jeff Straw.