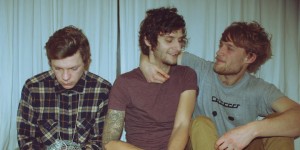 Brooklyn, NY’s Mightier Than Sword Records will release There is Nothing But Chemistry Here, the 2nd EP from UK experimental indie trio Tall Ships, on February 21. The EP will be available in the U.S. digitally and on vinyl for the first time ever.

Originally from the town of Falmouth on the south coast of Cornwall , England , Tall Ships now reside in Brighton . The band spent much of the last year playing UK festivals and last performed for American audiences during CMJ this past fall.

In describing one of their shows, British magazine The Fly raved: “There’s a distinctly tangible excitement in the air; an electricity in the crowd that fuels the trio from the beginning to the end of their set… with an inspiring energy that converts their complex, technically challenging tunes into visceral but intricate and delicate outburst of intelligent emotion – songs that tackle both the heart and the head, something clearly evident from the way in which the packed crowd sing their songs back at them…even the brand new songs, which are far from familiar, even to this dedicated crowd, garner the full attention for no other reason than the calibre of their compositions and the enthralling way they’re brought to life on stage.”

NME described There is Nothing But Chemistry Here as, “five tracks of post-Foalsian indie pleasure, all sharp edges, soft melodies and post rock nuances.” Gold Flake Paint Blog called it, “a fearless, bold and constantly inventive record that fully justifies the hype surrounding the band.”

Tall Ships are expected to return to the States for more shows this spring.

Pre-Order There is Nothing But Chemistry Here is now available for pre-order here.