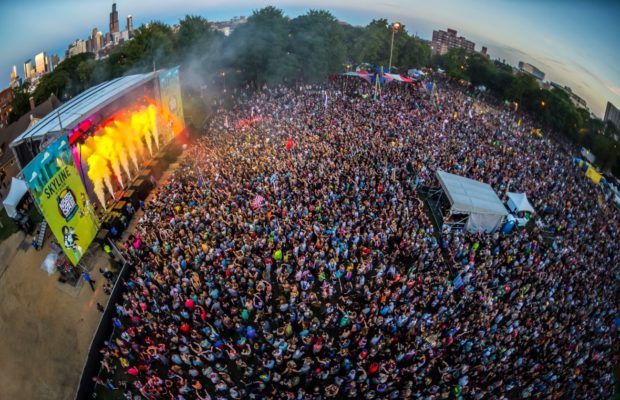 Thinking about summer coming to an end is all too melancholy as we make our way into the month of August. Luckily, your final hoorah is Labor Day weekend! If you’re still unsure of your Labor Day plans, may we suggest hitting up Chicago’s North Coast Festival, Aug. 31 – Sept. 2. In its ninth edition, North Coast is returning to Union Park in Chicago’s West side to deliver a fully immersive three-day festival bumping with dance music, hip-hop and rock-bands across four curated stages.

This year’s headliners include “future-funk” master JAMIROQUAI, Grammy-winner Miguel, and EDM superstar DJ Snake. If those headlining names aren’t enough to convince you to go, we’re sharing our top 10 non-headlining acts you should see at North Coast Fest next month. Known for giving a platform to rising electronic and rap acts, North Coast has an artist act for everyone.

Check out our favorite acts below!

Chicago native, Smokepurpp has been making waves in the Soundcloud rap scene since the release of 2016’s “Ski Mask.” With his upcoming projects Sound of Space and Deadstar 2, his set is worth the hype that could also include first listens to new songs.

OVO faves, DVSN are on the bill and are sure to be a dope act to see. Their last release Morning After is a bop and a half. The album is a mix of emotional lyrics and sultry R&B. They are Drake-approved if that gives you another reason to check them out.

Chicago’s very own JUICE WRLD will be at North Coast Festival! His recent release Goodbye & Good Riddance is the perfect blend of emo lyrics and melodic beats. This is the perfect listening for fans of Post Malone and Travis Scott.

Another rising Soundcloud rapper and frequent Lyrical Lemonade collaborator, Lil Skies should definitely be on everyone’s list of artist to see at North Coast. He recently collaborated with Wiz Khalifa and has a highly-anticipated project on the way. Catch him now before he is out selling arenas with your favorite rappers.

Electronic musician Robert Delong returns to Chicago and everyone should be psyched! His recent song with k. Flay is incredible and gives fans a taste of what they have been missing since his last album in 2015. New music in the set? We sure hope so!

Another artist who has been out of the limelight since 2015, RL Grime is slated for a comeback! He released a few new singles this year already and fans are anxiously waiting for a full album. He’s an artist who is bound to have an incredible light heavy show that will be sure to wow festival-goers

Alex Crossan, also known by the stage name Mura Masa is a Guernsey-born electronic music producer, songwriter and multi-instrumentalist. He has collaborated with fan faves like A$AP Rocky, Charlie XCX and Damon Albarn of the Gorillaz. His worldly inspired beats will get you dancing and moving. He is one to watch for sure!

Probably one of the biggest names in EDM music, Gramatik is an obvious can’t miss! His EP RE: Coil Part 1 is the perfect mix of funk and bass. Make sure to catch his set and bring friends to dance with!

Noah McBeth a.k.a NoBMe is a German producer and DJ. His latest work They Might’ve Even Loved Me is a brutally honest account of family, romance, sex and heartbreak. If you’re looking for a set to vibe with but still be in your feelings, then NoMBe is for you.

A personal favorite, Lil Xan should be on everyone’s schedules to see. The 21-year-old has collaborated with some big names already like YG, 2 Chains and Charlie XCX on his debut album Total Xanarchy. Known for his wild stage persona, he will be entertaining to watch and vibe with.

Make sure you stay tuned for the schedule and times to catch our Stitched Sound approved artists. See the full line-up and purchase your tickets to the festival before they sell out here.