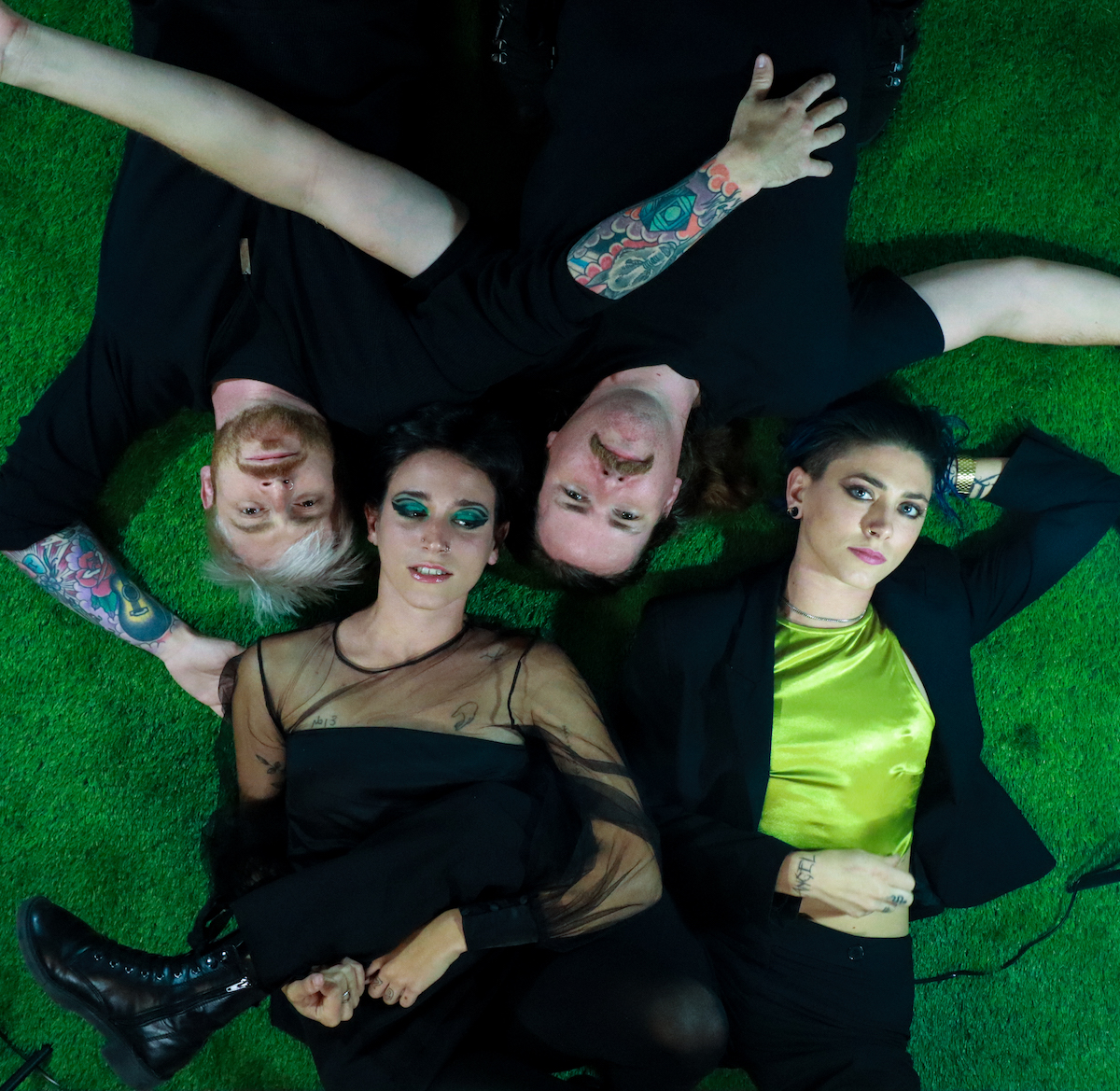 “Musically, I was heavy into Joy Division during this time and wanted to make something in that New Wave/Punk vein,” says Sandman Sleeps’ vocalist/guitarist Cristina Peck of the band’s newest punchy upbeat post-punk track “Fellini”, which she wrote with her bassist sister Alex Peak in 2010. “I liked the freedom in Joy Division’s music. There’s a lot of room for vocals when the guitar is minimized to playing single notes versus full chords. That is the inspiration for where those single notes came from that I played. It felt rawer than what I’d make on my own, which I loved.” Formed by Cristina and Alex as teens, Sandman Sleeps reconvened with renewed passion in 2019 and was enhanced even more with the addition of drummer Karsten Andersen and guitarist Zack Jones in early 2020. The band’s debut album Crisis Actor [out independently on March 26, 2021] was a decade in the making and it embroiders songs old and new with honed musicality and diverse life experience. Read the Big Takeover premiere HERE.

Cristina says “Fellini” is in one part about personal experiences, but it’s also an ode to their mom’s love of iconic film director Federico Fellini whose monumental film La Dolce Vita (1960) was particularly an influence for this new single. “Fellini” was written in 2010 by Alex and Christina when they (along with band friend and drummer Gavin McAlexander) were all jamming on a bass riff Alex started and had all found it “catchy as hell. I believe it was written all in that one sitting- it developed very organically.” Cristina altered some of the lyrics in 2020 mostly because there were parts she had “mumbled in gibberish” because she couldn’t decide on exact words, but for the most part she says she got lucky with “Fellini” and pretty much all the songs she’d wrote with Alex.

“I feel like working on ‘Fellini’ together brought to our attention just the fact that we can jam and write intuitively together,” she says. “When Alex and I write together I always felt this sense of wonderment- like this is moving in a neat direction and I don’t know where it’s going but it feels right. It always felt extremely intuitive and special- I suppose if you can say there is any magic involved in song writing that’d be the magical part for us. All the sibling telepathy.”

The recording process for “Fellini,” which began taking place in 2020, was also relatively quick and easy. “The full band took the song where it needed to be with energy drive and mood and we all just kind of nailed it. I think it may have been the easiest song to record.” Even though the track is twelve years old, Cristina says she still feels connected to it, “I can be really critical, especially of older things I write, but surprisingly this one held up- I still love it.” “Fellini” follows the album’s mesmerizing first single “Portrait of Jennie” (released in January) which was written by Cristina in June of 2020 while quarantining at her then partner’s place on the Florida’s Intracoastal Waterway, both sick with Covid. “Despite how draining and scary the sickness was, I’m fortunate to have eventually been able to find a calm in its lethargy,” she recalled. She says she felt “physically trapped yet increasingly spiritually free. I was forced to be hopeful, no matter what.” Recently having watched the movie of the same name she also took inspiration from its concept: lovers being brought together by an otherworldly phenomenon such as time travel/other dimensions, but this same phenomenon was also the boundary which ultimately kept the lovers at a distance.

On Crisis Actor, Sandman Sleeps merge various musical genres without ever feeling too muddled. Their debut album knows no boundaries and never panders, instead letting us run with its emotional hints to our own destinations, different on every listen. It’s effectively a “best-of” culled from a decade of songcraft. It’s an arresting, singularly evocative and authentic expression inspired by Pixies, Kate Bush, Talking Heads, and Tori Amos, yet not sounding like any of these – or anyone else. Crisis Actor can be pre-ordered/pre-saved HERE. You can connect with Sandman Sleeps via the following links.  Photo credit: Parisa Farbakhsh.