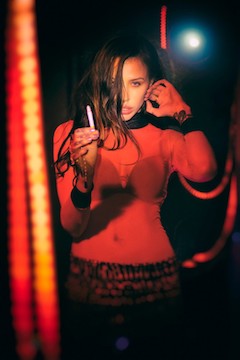 Los Angeles based singer, producer, songwriter, multi-instrumentalist Ramsey has released her new single, “Red Light”, the second single from her forthcoming EP, The Art of Survival, out September 20th.  “Red Light” reintroduces the abstract path that the The Art of Survival‘s debut single “Dark Side” took in launching a personal collection of stories culled from hundreds of ideas written over the last several years when living in Las Vegas prior to moving to LA.
Following the release of her retelling of “Cold” by The Cure on Christmas day 2018 and “Slave” on Valentine’s day of 2019, Ramsey’s The Art of Survival era was officially born.  In June of 2019, Ramsey released the video for album’s debut first single, “Dark Side.”  The album’s poignant second single, “Red Light,” flawlessly captures the raw power of Ramsey’s melancholy vocal range and reinforces her innate capacity to formulate and facilitate the transformation of memories and observations she gathered and compounded into the demonstratively perceptive songs and character arcs that would become The Art of Survival.  You can follow Ramsey and stay up-to-date on all album, artist and tour news via the following links:
Website | Facebook | Instagram | Twitter | Spotify | Soundcloud | iTunes/Apple Music | YouTube | Google Play