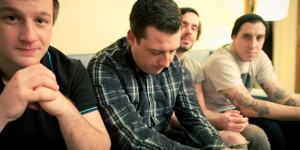 Make Do And Mend has released a new music video for their single “Transparent Seas” which you can watch below. It is an animated video from their debut full-length End Measured Mile. They worked with motion graphics designer Matt Frodsham about it.

James Caroll [Vocals/guitar]: We already did a live action video for the record, and it came time to do another. We decided we wanted to do something that not a lot of our contemporaries have done, so we took the leap and trusted a friend with the project. The song itself is about the inability to believe in a higher power, but being frustrated by the fact that that type of belief affords the believer a great deal of comfort and safety. I think that the vibe of the video fits those feelings very well.