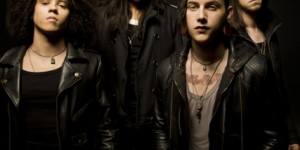 Black Tide recently met up with Guitar Center to record a new podcast, “At: Guitar Center With Nic Harcourt Podcast”. This podcast will feature Black Tide performing three tracks, (their single “That Fire” and two new songs “Fight ‘Till The Bitter End” and “Let It Out”) along with an interview with Gabriel Garcia (Guitarist/vocalist) and Steven Spence (Drummer). You can listen to it here. You can also listen to a new song off their upcoming album Post Mortem over at RevolverMag.com.

Be sure to catch them on the Rockstar Energy Drink UPROAR Festival this fall and pick up their sophomore album Port Mortem on August 23rd, which will be released via DCG/Interscope Records.